Firm behind 'be white to win' skin-pill ad apologises

A screen-grab from a video for a skin-whitening capsule features two images of actress Cirin "Cris" Horwang, one of which develops charcoal-black skin as she tells viewers “you just need to be white to win”.

The maker of a new skin-whitening capsule promoted in a commercial featuring a blackface model and the tagline "you just need to be white to win" apologised Friday following a firestorm over the “racist” ad.

Social media exploded in outrage on Friday after cosmetics maker Seoul Secret Thailand posted advertising and a YouTube video featuring two images of actress Cirin "Cris" Horwang, one of which develops charcoal-black skin to portray what supposedly would happen to the entertainer should she stop "taking care of herself".

Friday afternoon, the company pulled the video -- although a copy can still be seen below -- and issued an apology in Thai and English.

"Seoul Secret would like to apologise for the mistake, and claim full responsibility for this incident. Our company did not have any intention to convey discriminatory or racist messages," it said in the statement.

"What we intended to convey was that self-improvement, in terms of personality, appearance, skills, and professionality, is crucial."

In the video, Cirin told viewers "you just need to be white to win," capping a personal story of how important it is for the 35-year-old starlet to maintain her "whiteness" as she competes for roles against younger actresses trying to "steal the scene".

Wow. Another incredibly racist Thai advert. "You just need to be white to win" https://t.co/g75sjr7fUj pic.twitter.com/9MlWHoUL2B

Cirin says if she stopped using the pill, all her investment in skin tone would disappear and she would become a "dusky star", just as the screen shows her blackface double looking downcast and dismayed.

A noted women's rights advocate and author, who goes by the single name Kaewmala, led the barrage of criticism on Twitter, calling out Thai ad agencies for their repeated attempts to stigmatise dark skin and perpetuate racism.

Thai craze for whiteness rears its ugly head again. It never ends. Thai ad agencies are the worst of them all! https://t.co/ixUe65pdrj

"This was not due to ignorance, but a calculated strategy," she tweeted about the latest ad. "Shameless."

"Shocking to see this comparison of skin colour type of advertisement still being produced in 2016," he wrote. Seoul Secret's only reply was "thank you for your comment".

@Thai_Talk from the ad agencies perspective: mission accomplished. the ad is now getting 1000x more exposure than a toned down PC one

"Change the words, as it is really racist," wrote Kapook user Dekying Keedue. "'Just being white, you win?' This is not true. Runners, sportsmen, models, politicians, Miss Thailand, etc do not have white skin. There are many people with dark skin who win the gold medals, get the highest scores on the tests."

Maeya 'Mae' Nonthawan, Miss Thailand World 2014 well known for her honey-coloured skin, posted on her Facebook: "Blackskin can win. It's no one's business. This is a very outdated value. Let's prove oneself based on one's abilities. People will accept anyone who's capable and good regardless of her skin colour."

Condemnation of the video was so strong on YouTube, that the account owner early Friday disabled the ability to leave comments. Shortly before 4pm on Friday it was pulled offline, marked for "private" viewing only. The apology followed soon after. 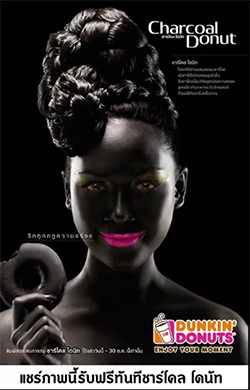 US-based Dunkin’ Donuts apologised for this 2013 ad by its Thai franchisee.

The Seoul Secret ad is hardly the first to earn Thailand scorn for racist advertising. In 2013, US-based Dunkin' Donuts came under fire for an ad showing an Asian woman painted in blackface to promote a new chocolate-flavoured product.

While the CEO of the Thai franchise quickly dismissed the allegations of racism, its American parent company issued an apology.

That same year, ad advert for beauty drink Verena L-Gluta Berry Plus incited public wrath by applying dark makeup to a fair-skinned actress to imply she had been born of an African family but was "lucky" enough to drink the product and turn white.

Thais' often-criticised lack of sensitivity to racial issues was exemplified by comments on Facebook, Kapook, Panthip and other social network sites. While remarks left in English or by foreigners almost universally condemned the campaign, most of the Thai comments simply asked where the pills could be purchased or warned of the dangers of skin-whitening cream.

The controversial commercial was filmed by director Paphangkorn Punchantarak and produced by Hub Ho Hin with design by Rod Wai Lert, according to a Seoul Secret press release.

"Rod Wai Lert (Thailand) presents the idea as told through a real-life insight that every woman has experienced: people who have white skin tend to be so attractive that they 'steal the scene' from other people," the statement read.

Thai media reported that the director was on holiday and not available for comment.