Children all over the country celebrated their special day on Saturday with a host of special events, gifts and refreshments, and activities ranging from air shows and arms displays to postcard-writing.

In Bangkok, the highlights of Children's Day were dinosaur robots and figurines on display at Government House. And as it has been every year, the prime minister's office and his chair at Government House were a major attraction.

This year, children had to register with their ID cards. They then received tickets and were divided into groups of 40 to visit the office one at a time.

Other activities at the seat of the government were free dental checkups, haircuts and the chance to pose for photos with "Standy Lung Too", a virtual figure of Prime Minister Prayut Chan-o-cha, whose nickname is Too.

Children also got to try their hand at being news anchors, visit model playgrounds, admire antique cars and Thai kites.

Sports stars including footballer Charyl Chappuis and badminton ace Ratchanok "May" Intanon were also on hand and entertain them.

In Mae Hong Son, governor Suwapong Kittipatpibul handed out gifts to 300 children at a hilltop school in tambon Huai Poo Ling of Muang district, where children, including those from hilltribe families, participated in shows and played games.

Children said they would love to have electricity in their community, which still relies on solar cells. They also prayed for better roads and transport systems.

In Nan, an air show involving small planes and 30 paramoters was a highlight, in addition to the ever-popular arms and tank displays staged by the military.

In Nakhon Ratchasima, children visited Army Region 2, where weapons, tanks and anti-aircraft artillery were displayed. Outdoor activities were also held including horse-riding, and shooting and artillery control demonstrations, as well as a singing contest.

In Khon Kaen, apart from arms displays, children wrote postcards to be sent to sick children who could not join them. (story continues below) 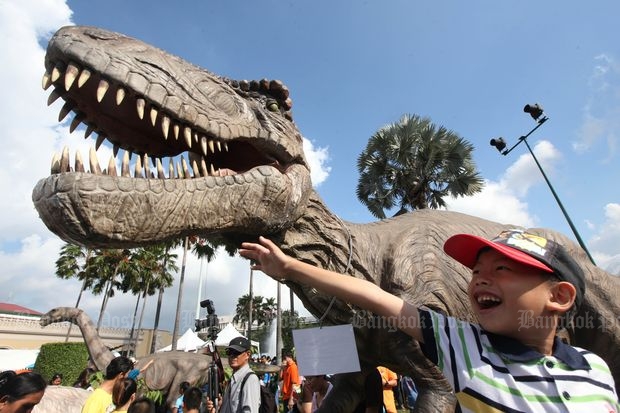 Dinosaur figurines are a major attraction at Government House. (Photo by Thiti Wannamontha)

The provincial office of TV Channel 11 also invited Phongsavanh Bank from Laos to join the event. Staff of the bank brought sweets and educational materials and also taught children some basic Lao vocabulary and information about the neighbouring country.

As well, children were thrilled by a display put on by the border patrol police of their general work and disaster-relief missions.

In Sakon Nakhon, some 10,000 parents and their children attended the event in Muang district. Among the activities were a painting exhibition, quizzes, games and a sufficiency economy exhibition, as well as a mini marathon.

Tanks, arms and communications gear were also on display.

In Songkhla, aerobatic air shows were the highlight, especially the Extra-300 or Red Blue. Children watched in awe and received air force caps as souvenirs.

In Trang, the Pa Lian Tambon Administration Organisation handed out gifts ranging from sweets and garments to cash and toys to about 20 Sakai tribal children who live on the Banthat mountain range.

It took 20 minutes to persuade the children to accept the gifts, after which they thoroughly enjoyed them.

Khai, chief of the Sakai group of 13 households, said this was the first time the youngsters had taken part in Children's Day activities.

"We never thought of taking them down to enjoy Children's Day activities as we didn't know what day it was. We're overwhelmed to see their joy on receiving the gifts," he said. 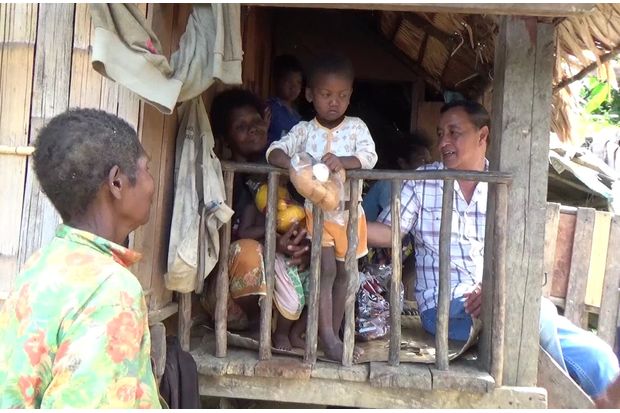 Sakai children receive gifts for the first time this year in Trang. (Photo by Matee Muangkaew) 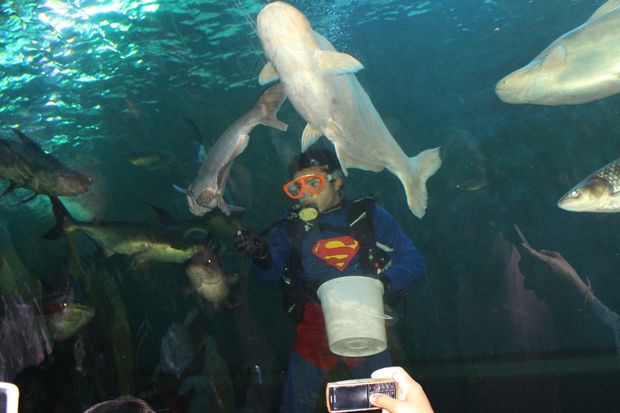 A superhero feeds fish in the aquarium where admission is free for children in Nakhon Sawan. (Photo by Chalit Poomruang)