Children watch a Pokemon dance show at Siam Paragon in Bangkok before the stage collapsed on Saturday. (PR photo)

Sixteen people, most of them children, were injured when a tent collapsed in high winds during a Children's Day show outside Siam Paragon shopping centre in Bangkok on Saturday.

The incident took place during the “Pokemon Day-Pikachu Dance Party’’ event around noon, causing chaos among people watching the show.

"Strong wind caused the tent to fly up, about one metre. Then wooden signs attached to the back of the tent flew off and injured nearby people,'' said Lt Gen Sanit Mahathaworn, the acting Metropolitan Police chief.

"A mother and her child suffered broken legs. The mother was trying to protect her child from getting hurt."

The injured were taken to a nearby hospital and all but two had been released as of Saturday evening. Police declared the venue off-limits pending an investigation.

Siam Paragon issued a statement saying it "would like to regretfully apologise for the accident which injured a total of 16 people'' on behalf of the event's organisers.

The event, scheduled from Saturday through Monday, was jointly hosted by True Visions, Siam Paragon and CMO as part of Children’s Day celebrations.

Pol Lt Gen Sanit said police would press criminal negligence charges against the owners of the company that installed the tent. They could face up to three years in prison and/or a fine of 6,000 baht. 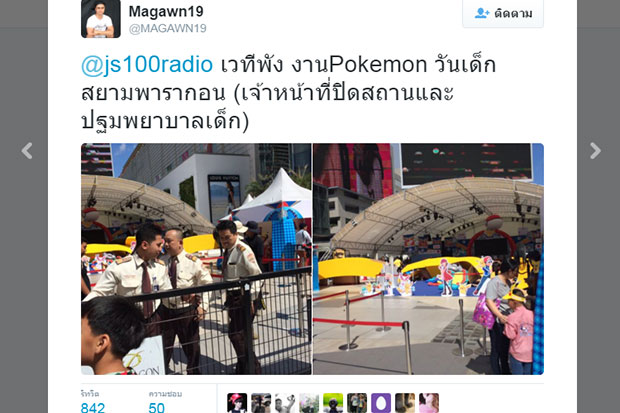