Police are weighing a charge of attempted murder against a Bangkok radio DJ who was filmed deliberately ramming another vehicle in a road rage incident on Friday. 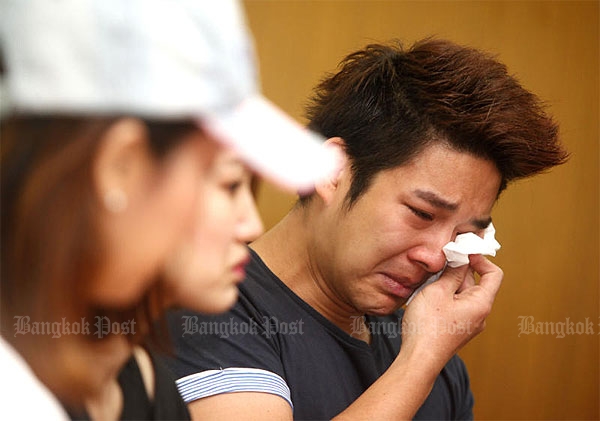 'I am man enough': Pattarasak Thiemprasert, who twice rammed his pickup into another car, weeps as he fronts the media to offer an apology at Din Daeng police station yesterday.

Footage of the assault, in which Pattarasak Thiemprasert was seen reversing his black Toyota Hilux twice into a stationery red Yaris, triggered online outrage after he initially claimed to be the victim of the attack.

Mr Pattarasak, who also goes by DJ Keng, was filmed immediately after the incident telling bystanders that the Yaris driver, Kavinkan Srireucha, had rammed his vehicle from behind.

He also claimed Mr Kavinkan had got out of his car and tried to assault him before a motorcycle taxi driver intervened.

“Please be fair to me. It’s horrible to have such a person in our society,” he pleaded.

But footage of the incident which soon spread online showed the roles were in fact reversed, and that Mr Pattarasak appeared to threaten Mr Kavinkan with a tyre wrench after twice ramming his car.

He was sacked by his radio station shortly after the clips went viral on Friday. Police have already suspended Mr Pattarasak’s driving licence for 60 days, and charged him with reckless driving. 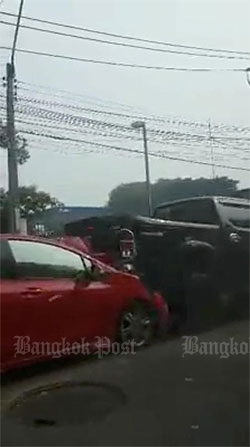 Crash course: Initially Mr Pattarasak claimed he was rammed from behind, but video showed otherwise.

He said the investigation would be straightforward as the area is well covered by surveillance cameras.

Pol Lt Gen Sanit said a charge of damaging property had not been filed, since Mr Kavinkan had agreed not to lodge an official complaint.

But experts are analysing footage from the scene to determine whether Mr Pattarasak intended to pose any risk to the other driver's life.

"If that is the case, an attempted murder charge will be laid against the truck driver,"  Pol Lt Gen Sanit said.

Mr Pattarasak, 35, surrendered yesterday to officers at Din Daeng Police Station and offered his account of the events leading up to the incident.

Speaking through tears before the media yesterday, Mr Pattarasak claimed he and the Yaris driver had been jostling for space on Mitmaitree Road when Mr Kavinkan showed him the middle finger, a gesture he promptly returned.

The DJ claimed that both vehicles then came to a stop, and Mr Kavinkan got out of his car and knocked on his window.

Mr Pattarasak claimed he did not start the fight, and said CCTV footage would prove it. But he conceded that he was guilty of ramming the Yaris. “I accept that I reversed and hit the car," Mr Pattarasak said.

He said he hoped the MPB chief would give him "justice" based on the available evidence, adding that the assault was out of character. He also urged the public to end their storm of online comments attacking his family and school. “I am guilty. I accept that. I am man enough,” he said.

Referring to social media posts claiming the DJ has committed similar offences several times before, Pol Col Ekarat Limsangkat, deputy chief of the Traffic Police Division, said there were no records of any such complaints being filed.

Mr Kavinkan said Mr Pattarasak had aggressively cut in front of him while driving on Mitmaitree Road, forcing him to veer into an oncoming lane to avoid a crash.

The Yaris driver said he then tried to get back into the same lane, which may have caused Mr Pattarasak to believe he was trying to squeeze him back out of the lane.

He said that after seeing Mr Pattarasak show his middle finger, he got out of his car to speak to the pickup driver.

When Mr Pattarasak declined to exit his vehicle, Mr Kavinkan said he returned to his car, at which point Mr Pattarasak rammed him twice. The DJ then got out of his vehicle, brandishing a tyre wrench and yelling loudly as he walked toward Mr Kavinkan. Several motorcycle taxi drivers intervened to keep the two men separated.

Mr Kavinkan said he decided not to lodge a police complaint against the DJ because he felt sympathy for the man’s wife, who had given birth last month. “I accepted that both of us were guilty since we were hot-tempered,” Mr Kavinkan said. 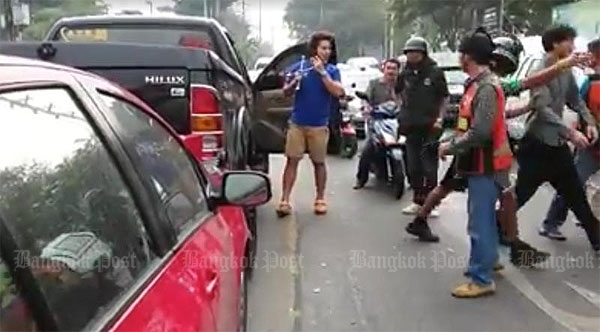 Making a tool of himself: Mr Pattarasak brandishes a tyre wrench as he confronts the other driver.