No decision on new supreme patriarch

The Sangha Supreme Council met without discussing the selection of a new supreme patriarch on Monday, as the prime minister was petitioned to delay the controversial appointment.

The petition, backed by 300,000 signatures, was submitted through PM's Office Minister Panadda Diskul. 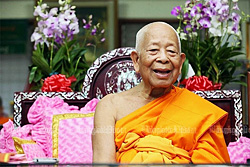 Phra Buddha Isara's challenge came as members of several Buddhism protection networks gathered at Phuttamonthon in Nakhon Pathom, where the  today to petition the Sangha Supreme Council (SSC) to delay the nomination of the 20th supreme patriarch.

Somdet Phra Maha Ratchamangalacharn of the Maha Nikaya sect, the 90-year-old abbot of Wat Pak Nam Phasi Charoen also known as Somdet Chuang, is the most senior of the eight candidates.

But his nomination has been opposed by many groups because he is the subject of a Department of Special Investigation probe into several complaints against him, such as his alleged involvement in a luxury car tax evasion scam and support for Phra Dhammachayo, the controversial abbot of Wat Dhammakaya.

At the National Office of Buddhism in Phuttamonthon, about 30 police  and 10 soldiers were on duty as Somdet Chuang's opponents and supporters demonstrated outside.

Inside, the Sangha Supreme Council meeting was chaired by Somdet Chuang. However, the appointment of Somdet Phra Maha Ratchamangalacharn as the country's 20th Supreme Patriarch was not on the agenda and was not discussed.

Before the meeting, Satien Vipromha, leader of a group called Academics for Buddhism, submitted a letter to Panom Sornsilp, director of the National Buddhism Office, asking that the appointment of the new patriarch to be based on the amended Sangha Law, to prevent confusion and division in society.

Deputy Prime Minister Wissanu Krea-ngam said the appointment of the new patriarch was a sensitive issue. Digging into the background of the candidate could lead to dispute.

“The appointment of new patriarch will need to follow both the law and tradition,” he said.

Mr Wissanu said the protesters had the right oppose to the proposed appointment of the new patriarch. The procedure was the decision would be forwarded from the Sangha Supreme Council to the government and then for royal approval, but now was not the time.

The prime minister said he had given instructions that any problems should be  solved first, otherwise he could not propose the nominee for appointment.