Medical authorities note melioidosis exists around the world in countries near the equator, but there is special danger for rice farmers of the Thai Northeast. (Creative Commons, Wikipedia)

The Health Ministry has been urged to boost public awareness of the little-known deadly bacterial disease melioidosis, which killed 89,000 people worldwide last year.

Thailand is among 79 countries where the disease is found.

The call was made in a medical research team report published Monday in the online journal Nature Microbiology, saying the disease, which is difficult to diagnose, is likely to be present in many more countries with millions of people at risk.

Direk Limmathurotsakul, head of Microbiology at Mahidol Oxford Tropical Medicine Research Unit (MORU), who was involved in the study of the disease, said research found that people who work in the agricultural sector in the Northeast are at high risk of catching the illness and half who caught it died due to delayed treatment and drug resistance.

“We found the disease shares many symptoms with blood or lung infections. Doctors will not know the cause until a microbiological culture is made to detect the bacteria. However, in many cases, death arises due to delayed treatment as doctors are not sufficiently aware about the disease,” he said.

According to the study, 2,000 Thais catch melioidosis every year and half of them die. The rate of people suffering from the disease is close to that of tuberculosis patients.

Dr Direk suggested the Public Health Ministry raise awareness of the disease among public health workers and the public, especially farmers who spend time in paddy fields, saying that if they follow practices to prevent leptospirosis, they will be safe from contracting the disease. 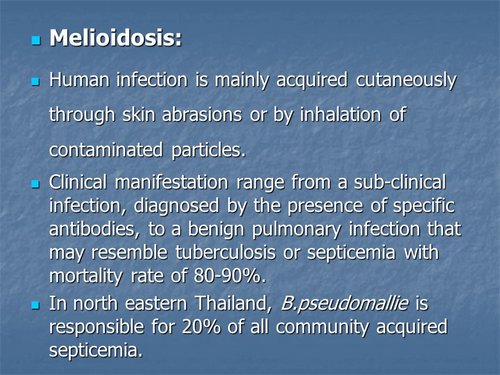 MORU scientists worked with medical researchers from Oxford University and the University of Washington in Seattle on the melioidosis study.

The researchers believe the disease is present in 79 countries, including 34 that have never reported cases, such as Japan.

The Nature Microbiology report recommends that health workers and policymakers make melioidosis a high priority as the number of cases is expected to rise as diabetes increases across the tropics, especially among the poor, while international travel will increase the risk of introducing the pathogen to new areas.

The study is the first to provide an evidence-based estimate of the global extent of melioidosis, which is caused by Burkholderia pseudomallei, a highly pathogenic bacterium found in soil and water in parts of Southeast Asia, South Asia, northern Australia, sub-Saharan and southern Africa, and the Middle East.

The MORU said that contracted through the skin, lungs or by drinking contaminated water, melioidosis is resistant to a wide range of anti-microbials and inadequate treatment may result in fatality rates exceeding 70%.

Patients with diabetes mellitus, chronic kidney disease or those who drink alcohol excessively are at high risk of infection.

The three-year study collected human and animal melioidosis cases and environmental reports of B. pseudomallei published between 1910-2014.

The researchers combined these cases in a formal model that suggested melioidosis is severely under-reported in most of the 45 countries where it is known to be endemic and that it probably endemic in another 34 countries that have never reported cases.

The study estimated that the disease killed 89,000 of the 165,000 who were infected with it last year, greater than deaths from leptospirosis (50,000 a year) or dengue (12,500 a year), two current priorities for many international health organisations.