Motorcyclists pass through the flooded Thippawan housing estate on Soi Thippawan 41, off Theparak Road, in Samut Prakan after heavy rain in Bangkok and surrounding areas on Wednesday morning. (Photo by Somchai Poomlard).

Heavy rain in Bangkok and Samut Prakan caused flooding in several areas and paralysed traffic on many roads on Wednesday morning.

Traffic moved at a snail’s pace on Charoen Krung Road from Tanon Tok intersection to Chan intersection. Srinakarin Road was inundated with traffic reduced to a crawl from Srinut intersection to Wat Sri-iem flyover around 8.25am.

Bang Pu industrial estate was waist-high in floodwater and workers were unable to enter many factories, some of which shut down for the day.

Tambon Bang Pu municipality crews raced against time to pump water from the flooded areas. However, many areas still remained inundated as irrigation canals along Sukhumvit Road burst their banks, sending water out to flood the streets.

Bang Pu mayor Theerapol Chuncharoen said he had asked the Irrigation Department to open the floodgate at Yaek Ramru so water could be drained out. 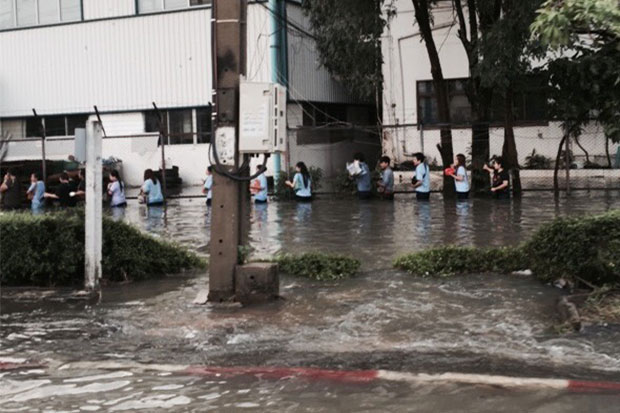 Workers wade through waist-high floodwater at Bang Pu industrial estate in Samut Prakan on Wednesday. Flooding forces many factories to close for the day. (Photos by Sutthiwit Chayutworakan)