Authorities have begun to regulate the jet ski rental business in Phuket to boost the island's image and tourist confidence.

Phuket Marine chief Phuriphat Theerakulpisut said Thursday the local jet ski rental business will be overhauled to provide safety for tourists and prevent visitors from being exploited by operators.

He was speaking at a meeting with operators at city hall in Muang district.

Mr Phuriphat said the Phuket Marine Office was asked to regulate the rental of jet skis while the Provincial Local Administration Office will be responsible for the zoning of beaches.

He said only registered jet skis will be allowed to operate in local waters. All are required to have insurance and renew their operating licences annually.

It is hardly the first time Phuket has promised to crack down on the scam.

The most recent concerned "crackdown" was in November-December, 2009. Then-Phuket governor Vichai Praisa-ngob introduced a regulation that made it compulsory for all commercial jet skis on the island to be insured.

The theory was that insurance would make confrontations unnecessary, since any damage to a jet ski could be passed to the insurance company.

Mr Vichai and his backers clearly did not understand the nature of the scam, which is to claim damage which either does not exist, or which the operators themselves cause, and point out to the customers after their rental period ends.

The proposed regulations touted Thursday did not explain how the new regulations will address the complaints for years that certain jet ski operators cheat their customers.

They claim riders caused damage - typically a scratch or dent - and demand the tourists immediately pay exorbitant amounts for repairs. The demands quickly escalate to threats of violence if the tourists refuse.

The officials did not address this specific complaint, which is known around the world. A Google search Friday morning for "Phuket jet ski scam" turned up more than 110,000 hits.

Arguably the most-commented letter ever written to the Bangkok Post was the PostBag letter shown below, at the end of this article. It addressed an identical problem at Thailand's other popular seaside resort, Pattaya, and explained in detail how the scams proceed.

Both Pattaya and Phuket authorities promised action after this letter, printed Feb 3, 2012. Another crackdown came and went.

Currently, there are 286 registered jet skis in the province.

The office will not accept additional registrations, he said.

"Every jet ski has to be anchored in the water. They are not allowed to park on the beach. Clients who rent craft must be over 18 years old. If they are underage, they have to be accompanied by jet ski staff," said Mr Phuriphat.

He also insisted legal action will be taken against operators who break the law. Their right to possess a craft will also be revoked.

In response to authorities' measures, jet ski operators said they were willing to comply with the law.

Meanwhile, deputy governor Chokdee Amornwat said local authorities have been working on a beach zoning plan which was expected to be completed by this month.

Only 10% of a beach area will be allowed for vendors to offer umbrella and deckchair rentals, said Mr Chokdee. 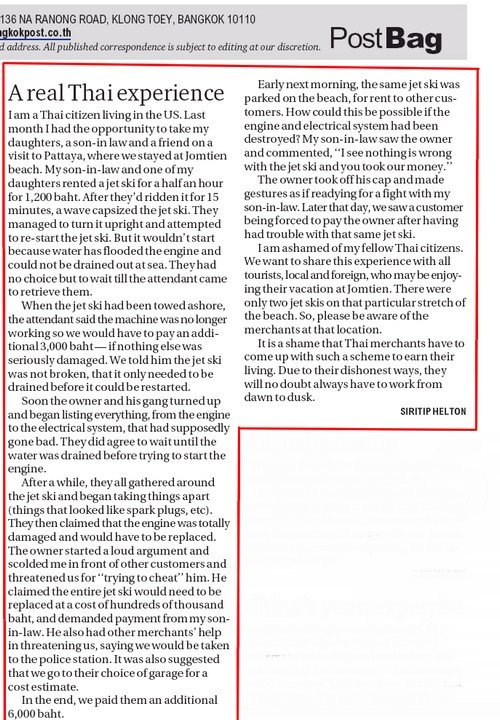