The Royal Irrigation Department has begun pumping water from the Mekong River and redirecting it to drought-afflicted regions of the Northeast. 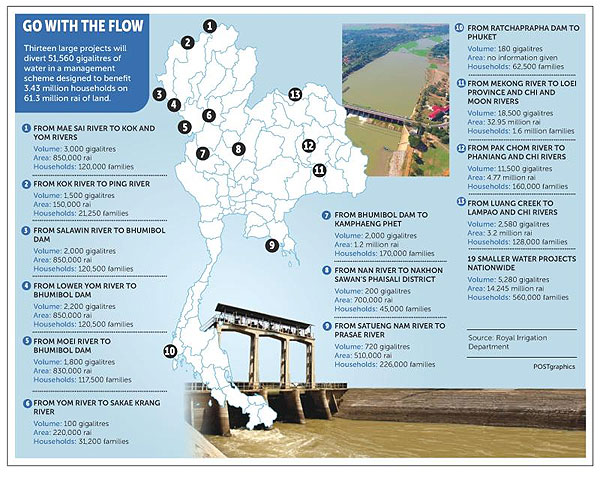 The RID has shied away from using the term "diverted", instead saying only that it is "using" the water as it looks to bypass consultation with the Mekong River Committee.

The move follows a Jan 11 resolution issued by the National Water Committee, chaired by Prime Minister Prayut Chan-o-cha, allowing the RID to use water from the Mekong for agricultural and domestic consumption in times of drought.

It is one of 13 large water diversion projects initiated by the RID as part of a scheme designed to deliver water to more than three million households on 61.3 million rai nationwide.

Once completed, the water diversion project will help increase the total irrigated land area in the Northeast from 500,000 to 1.3 million rai, he said.

"We still need a large volume of water from the Mekong River to fill other river basins across the country to help ease drought as well as secure daily water consumption in the northeastern region."

Mr Thanar said the RID expected the first phase of the Huay Laung project would help increase water for consumption in the lower Huay Laung zone, and would have the potential to provide irrigation to 15,000 rai of agricultural land in the area.

A source close to the project said the department has tried to stick with the words "water use", instead of "diversion" which could raise challenges with the Mekong River Commission.

She said if a member of the MRC "uses" water from the river for consumption, there is no need to consult with the regional body. But prior consultation is required if water is taken to serve development projects.

“For the time being, we are just 'using' water from the Mekong River for consumption. When we expand our project to include irrigation development, it is considered water diversion that requires prior consultation with the MRC," the source said.

“The MRC has no authority to say no or yes to our project."

The Network of Isan River Basins has released a statement opposing the water diversion project, saying the government risks repeating the failure of the Mekong-She-Moon and Pak Moon dam projects, which had adverse effects on regional water management.

Freshwater biodiversity has been seriously damaged by those projects and locals are still suffering as a result, the network said.

It called on the RID to include locals in its water management plans, and said there was no need to divert water from the Mekong as villagers already had systems in place that were in line with their local ecology.

Santipab Siriwatpaiboon, a lecturer at Udon Thani Rajabhat University, also voiced concern about the diversion project, saying it would place a financial burden on local administrative organisations as pumping stations would run up electricity bills in excess of one million baht per month. He said that price burden would eventually be passed on to farmers.