A fire is the only way to keep warm for many people in the North and Northeast of Thailand, where a severe cold spell is set to continue. (Photo by Saiarun Pinaduang)

The Meteorological Department warned on Monday it is going to get colder in the northern half of Thailand.

The strong high pressure zone from China still covers the entire northern part of the country, with  thundershowers and strong winds in some areas.

Because of this, the short cold spell is expected to become  more severe, dropping by another 2-4 degrees  Celsius today and tomorrow.

The minimum temperature in the North is forecast at 8-14C, with isolated frosts on mountaintops; 8-15C in the Northeast; 14-18C in the Central and East; and, 16-18C in Bangkok Metropolis and vicinity.

On Jan 26-27, a westerly trough from Myanmar is forecast to cover the North and Northeast and the cold spell will persist.

In the Northeast, the temperature in Sakon Nakhon had dropped to 8C by 10pm on Sunday.

People living around the Phu Phan mountain range had to resort to bonfires to keep themselves and their animals warm.  Many new-born calves were reported to have died of the cold weather.

A 61-year-old man identified as Nawin Siripongthanakorn was found dead in his house on Rathbamrung road in Kok Somhong community in the Sakon Nakhon Municipality on Monday morning.  He was lying dead near a fire stove.

Nearby residents said he and some neighbours drank local liquor last night to keep themselves warm. The neighbours left late in the night, leaving him alone in the house by the stove.

In Surin, the temperature fell to12-14C overnight, the lowest in a decade.  At the elephant centre in Dong Phudin National Park in tambon Krapho of Tha Tum district, elephants were kept warm by their handlers with bonfires.

In Chiang Mai, the temperature reportedly dropped to 3C on top of Doi Inthanont, with wind and rain.

In nearby Chiang Rai province, the temperature on the top of Phu Chifa mountaintop in Thoeng district was -2C degree Celcius between 6am-8am on Monday.

In the plains, the temperature this morning fell to 8C.

The temperature in Phayao was 7-9C on Monday morning under a cloudy sky. The cold spell was augmented by persistent wind and rain. 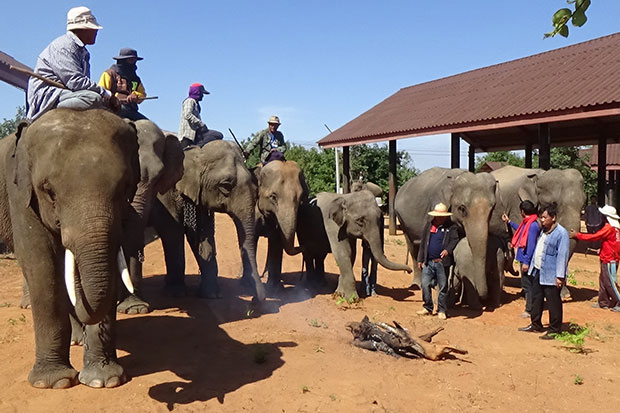 Mahouts take their elephants out to exercise and warm themselves at a fire in Surin province. (Photo by Nopparat Kingkaew) 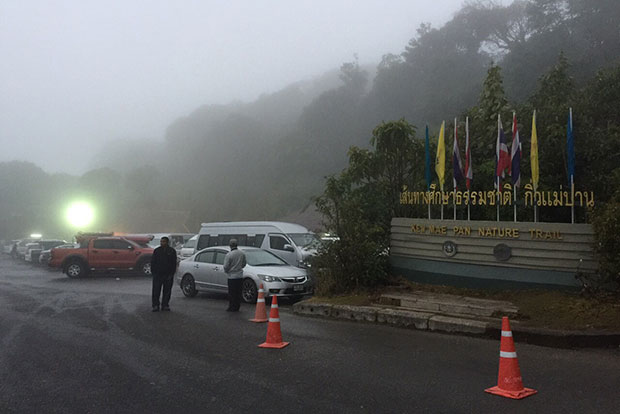