"Child angel" dolls are officially accepted aboard planes with some conditions. (Photo by Pattanapong Hirunard)

Aviation authorities and airlines representatives agreed on Wednesday that “child angel” dolls must be placed under seats or in overhead compartments as they are technically classified as luggage.

Flyers can strap a doll into an adjacent seat only if they buy it a ticket.

The Civil Aviation Authority of Thailand (CAAT) met Wednesday to discuss the doll craze with airline and airport executives amid demands from superstitious passengers that they be allowed to carry their baby-sized figurines aboard aircraft as they believe they are possessed by the spirits of angels and would bring them good fortune.

Acting CAAT director Chula Sukmanop said afterwards that the dolls were considered hand luggage, so they must be placed under the seat in front of passengers or in overhead bins during takeoff and landing.

Owners would be allowed to place their dolls in seats, but they would have to buy additional tickets under the human passengers' names, he said. Flyers who did not want to sit next to the spooky dolls could have their seat reassigned, he said.

Travellers are allowed to carry on dolls, as that did not violate any International Civil Aviation Organisation safety rules, as long as they are classified as carry-on luggage, Mr Chula said.

However, the dolls must be screened and x-rayed before being brought aboard an aircraft. Anyone disagreeing with that procedure would not be allowed to bring their toys on board, he said. 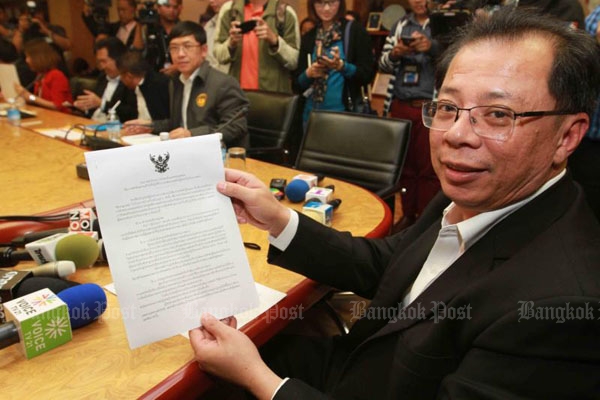 Chula Sukmanop, acting director of the Civil Aviation Authority of Thailand, shows a copy of a new regulation to government "child angel" dolls aboard planes at his office in Bangkok on Wednesday. (Photo by Somchai Poomlard)