The police raid on elderly card players in Pattaya last week may have earned Thailand international ridicule, but it also looks set to cost the country money as hundreds of “bridge tourists” threaten to cancel their holiday plans. Good sport: Khunying Chodchoy Sophonpanich, president of the Asia Pacific Bridge Federation, has been inundated with questions from international players asking if it is safe to travel to Thailand.

“This is very bad for our image,” said Khunying Chodchoy Sophonpanich, president of the Asia Pacific Bridge Federation.

“First of all, the whole world will look at us in a bad light, and think that we don’t even know what bridge is. Secondly, the tourism business will suffer.”

According to Khunying Chodchoy, at least 10,000 travellers arrive in Thailand every year on “bridge tours”, with Pattaya and Phuket the most popular destinations.

“Sea, sun, and sand are what they want, especially those who are escaping from cold weather in their own countries,” she said. 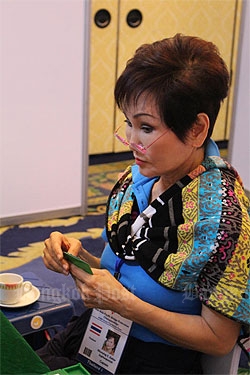 “They come to Thailand, relax and lay in the sun during the day, then by 4pm they go to play bridge until 8pm. They can then have a late dinner and do some shopping, go to bed and start all over again.”

Since police raided the Jomtien and Pattaya Bridge Club on Wednesday, Khunying Chodchoy, who is the daughter of the late Bangkok Bank founder Chin Sophonpanich, has been inundated with questions from bridge players across the globe about whether it was still safe to travel to Thailand.

One group from Norway, with more than 300 members, said they were reconsidering their travel plans after booking a hotel in Jomtien as part of a bridge tour.

“Thailand has been one of the preferred destinations of many bridge lovers for the past 10 years,” Khunying Chodchoy said. “It will be a shame if we lose this type of tourist.” Police dropped charges against the Pattaya bridge players after Khunying Chodchoy intervened to explain that playing bridge did not violate any laws. But the case will not be over until police file a report to prosecutors.

All 32 people who were playing at the club on Wednesday had their passports confiscated by police, to be kept until the case is resolved, which is likely to take three weeks.

Pattaya City Police Station superintendent Sukkatad Pumpanmuang said he was trying to wrap up the legal process as quickly as possible. He has offered to return the confiscated passports, but said police would still need to keep a photocopy of each one.

The owner of the bridge club will still have to pay a fine for organising an event at a public venue without notifying authorities, he said.

Jeremy Watson, 74, operates the computer scoring system for the bridge club, of which he has been a member for the past 15 years.

“I have no problem with police coming to raid us, we have nothing to hide,” said Mr Watson, who has lived in Thailand since 1969 without any previous run-ins with the law.

“In fact, they came here three times before but it always ended nicely, with a handshake.”

After taking the players to Pattaya Police Station, officers asked each of them to sign a document admitting that they were guilty of illegal gambling. They were then required to pay 5,000 baht each to secure their release on bail.

Only one woman, a German in her late 60s, refused to pay the money.

The woman has travelled to Pattaya annually for the past five years with her husband, staying for two months each time. The main purpose of her visits have been to “play bridge with people she knows”, according to Mr Watson.

The woman refused to pay any money to the police or to sign any documents put in front of her, insisting she had done nothing wrong. Mr Watson eventually paid to bail her out.

Police identified Mr Watson as the head of the operation, for which he was fined 10,000 baht, and slapped him with an additional fine of 140,000 baht for possessing more than 150 stacks of untaxed playing cards.

Mr Watson was released about 5am on Thursday, though his passport and driving licence are still with the police.

“All of this was just the result of conflict that the restaurant’s owner has with a local lady,” Khunying Chodchoy said. “I hope we can get this sorted so that Thailand can regain its reputation as a bridge holiday destination.”