The body of Darel Davenport, 54, on the second floor of a house located next to his Sukhumvit Soi 19 condo tower where he fell after climbing over from the balcony of an adjacent room 39 floors above. (Photo from Poh Tek Tung Rescue Foundation volunteer's Facebook page)

The troubled US owner of a Soi Cowboy go-go bar died Monday after apparently falling from the 39th storey of his Bangkok condominium.

Darel Davenport, 54, fell onto the second floor of a house located next to his Sukhumvit Soi 19 condo tower around 2.30pm while climbing over from the balcony of an adjacent room after he forgot his keys.

Pol Capt Pongsak Nonthachote, an investigator at Lumpini police station, confirmed the Davenport had locked himself out and asked owner of an adjacent condo to climb over. Forensic police found his fingerprints on the wall at the scene, Pol Capt Pongsak said, adding it was an accident.

Davenport's death marked the end of a five-week spiral that began on New Year's Eve when the majority partner in The Dollhouse, one of the oldest in Bangkok's adult nightlife industry, was attacked by staff members of the Soi Cowboy bar following an after-midnight tirade, an assault he documented in public posts on his Facebook page.

In the following weeks he would fire a dozen of the dancers working for him, spend several days in a Pattaya jail, fire his longtime manager and, a week ago, part ways with the rest of the bar's entertainment and service employees, forcing the go-go bar into darkness. He was seen by an acquaintance sleeping on a Soi Cowboy bench on Saturday night and, since then, furtively ducking in and out of the bar, which reportedly was left uncleaned with no running water.

Friends, family members and co-workers acknowledged that Davenport had struggled with addiction to cocaine and other drugs for some time, but his personal crisis intensified in recent months.

His descent into depression, paranoia and, ultimately, death was chronicled on his Facebook page, where weeks of posts - all marked "public" - consisted of rambling pleas for his staff to return and rants against people supposedly out to get him, all interspersed with photos of injuries he sustained along with way.

Davenport through his years in Bangkok was extremely well liked and he was an experienced skydiver and base jumper with no fear of heights, so his decision to climb between balconies didn't surprise some who knew him and posted their farewell wishes on Facebook Monday night. But he also had suffered a serious ankle injury that had become infected, which could have limited his mobility.

Posts from concerned loved ones pleaded with Davenport to seek help and those who knew him on Monday expressed their grief over his death. But, at the same time, they conceded that they long had feared the colourful staple in Bangkok's nightlife scene might end up in a tragic end. 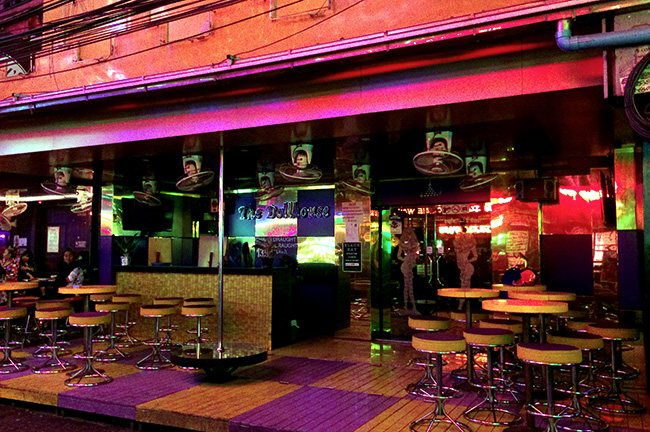 Davenport's bar, The Dollhouse, in darkness for the fifth straight night on Sunday. (Bangkok Post photo)