Charges of premeditated murder and destroying and concealing a human body were pressed against a Spanish man who is the prime suspect in the murder of a fellow Spaniard whose body parts were found in the Chao Phraya River last week.

The charges were brought against Artur Segarra Princep, 37, after he was apprehended on Sunday evening in the Cambodian coastal town of Sihanoukville where he had checked into a guesthouse a few days earlier, the Associated Press reported.

Mr Segarra was extradited to Thailand Monday and is now in police custody in Bangkok. Immediately after he was brought back to the kingdom, the Criminal Court issued a warrant for his arrest on premeditated murder and body concealment charges.

National Police Chief Chakthip Chaijinda told a press conference Mr Segarra denied any involvement in the murder of David Bernat, 40, a consultant with a foreign company.

Pol Gen Chakthip said the suspect travelled back and forth between Thailand and Cambodia several times over the past few years. He can speak Thai fairly well.

He was accused of killing Bernat, dismembering his body and discarding the parts in the Chao Phraya River late last month. The body parts were discovered in the river last week. Medical examiners said they believe he died between Jan 25 and Jan 27 by suffocation.

Police said Bernat may have been abducted, tortured and forced to transfer a large amount of money before being killed.

The money trail indicated more than 37 million baht was wired twice from Bernat's account in Singapore to Mr Segarra's account. 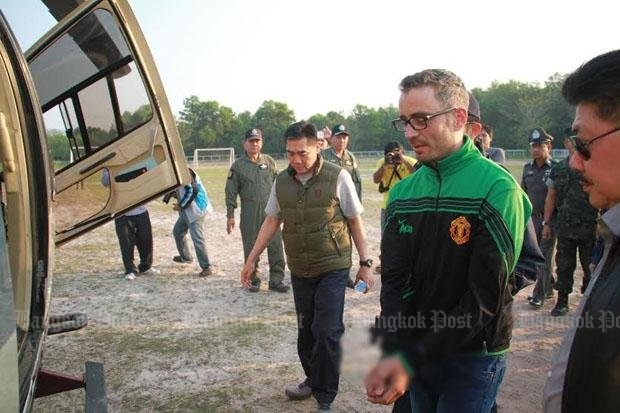 Mr Segarra was arrested in Sihanoukville by Cambodian police, and transferred back to Thailand. Police brought him to Bangkok via helicopter. (Photo by Jakkrit Waewkraihong)

Last Thursday, Mr Segarra withdrew several million baht of the wired money from his account from ATMs in Bangkok's Min Buri district and Ayutthaya's Wang Noi district and over the counter at Kasikornbank's Suwinthawong branch in Bangkok.

It was the second search of the two locations to gather more evidence.

According to police, Mr Segarra's condominium on Rama IX Road rented since July last year was believed to be where Bernat was killed and his body dismembered.

CCTV footage at the condo showed Mr Segarra on his motorcycle with Bernat riding pillion on Jan 20, the day the victim was last seen.

A police source said Mr Segarra was captured in footage carrying a large bag as he left his condo on his motorcycle on Jan 26.

On Jan 31, the footage showed him leaving his condo with a freezer.

Police suspected that after the murder, Mr Segarra hid the victim's body parts in the freezer and discarded them in the river one by one.