The army changed stories Monday, admitting it plans to buy new tanks, saying it is in the process of setting up a procurement committee.

Army spokesman Col Winthai Suvaree said the army's procurement panel will consider all possible options before making a decision based on cost-effectiveness and transparency.

He did not elaborate on the plan. Earlier, military spokesmen denied the army was interested in purchasing Russian-made tanks, but that version of the facts changed on Monday.

Col Winthai's comment follows reports by some media outlets that the army has decided to buy Russian-made T-90 tanks.

The reports coincide with a planned visit to Russia later this month by Defence Minister Prawit Wongsuwon who reportedly plans to inspect this model of tank.

Col Winthai said the army is aware of public concerns about defence spending and it will keep the public informed if there are any developments.

Gen Prawit earlier denied the army's plan to buy tanks but admitted he was invited to see the Russian model.

He stressed such a visit was normally accompanied by an inspection of armaments and defence technology, but it did not mean a commitment to buy them.

According to Defence Ministry spokesman Kongcheeo Tantravanich, Gen Prawit and Deputy Prime Minister Somkid Jatusripitak are scheduled to visit Russia from Feb 23-27 as guests of the Russian government and they will discuss security and economic cooperation with their Russian counterparts.

Prime Minister Prayut Chan-o-cha is also scheduled to visit Russia in May for the Russia-Asean commemorative summit which marks the 20th anniversary of relations as dialogue partners.

An army source said Gen Prawit and army chief Gen Thirachai Nakwanich are proceeding carefully with the tank procurement plan following the delayed delivery of T-84 Oplot tanks from Ukraine which cited its internal political turmoil as the reason for the hold-up.

They decided to buy 50 T-84 Oplot tanks two years ago, but Ukraine has delivered only 10.

The army's committee is said to be considering T-90 tanks from Russia and two Chinese models, the MBT3000 and VT4. 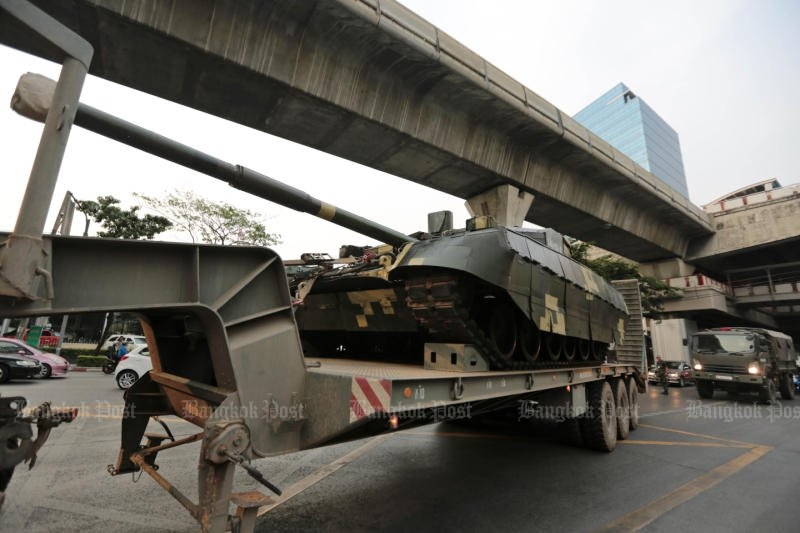 The newest tank in the Royal Thai Army is the T84 Oplot, sold by Ukraine. The first one arrive last month (above) but have stalled after just 10 tanks were delivered. (Photo by Chanat Katanyu)

In late January, Gen Thirachai visited China and had a look at some models of Chinese-made tanks. He showed interest in the Chinese models and asked an army committee to study the options.

Aside from the Russia visit by the Thai delegation, the secretary of the National Security Council of Russia, Nikolai Patrushev, is scheduled to visit Thailand from tomorrow to Friday this week, according to a Russian embassy official.

The official said Mr Patrushev, who is one of President Vladimir Putin's close aides, will hold talks with Gen Prawit over security issues, but did not elaborate if the tank purchase is on the agenda for the talks.