Suthat Rungruanghiranya, an executive at ThaiHealth, said there are around 12 million smokers in Thailand, and about half wanted to quit according to a survey in 2014.

However, only a few of them succeeded in doing so and the currently available level of assistance was unable to help them all.

He said the phone 1600 "Quitline" was able to handle around 50,000 calls a month and had a 40% success rate in helping smokers give up the habit for six months or more. The Fasai Clinic could help about 10,000 people a month, and had a similar success rate of around 38%. 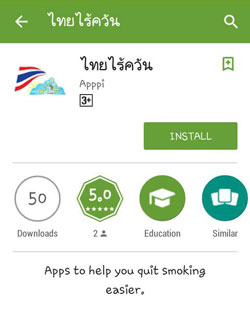 The app install as shown on a mobile phone.

The Smokeless Thailand app had been developed to make assistance more readily available to the public. It was a free download for both Android and IOS systems.

“The Thai Rai Khwan application is a guide to help people who want to quit smoking by themselves, so they can be serious about it be successful in giving up smoking,”  Dr Suthat said.

Wittaya Asavasathien, managing director Apppi Co which developed the application, said it brought together information, technique and the right and most effective instructions for quitting smoking, along with reminders to  users that they were in the process of giving up tobacco.

Users can also keep  a record of their smoking, so they can analyse the factors that cause them to turn to a cigarette. The application links with other social media apps so users can exchange experiences and techniques while quitting.

It is available for download at Android and Apple app stores.