Wife says senior cop not under any stress

Pol Lt Col Jan Chaisawasdi (right) files his letter complaining about the prime minister's order scrapping the position of official interrogator to a government official at the complaints centre on Monday. The two were flanked by former Democrat Party MP for Bangkok Watchara Petchthong. (Photo by Thanarak Khunton)

Doubts have emerged over whether a police officer who was being promoted actually committed suicide after he was found dead at his home yesterday — four days after he sent a petition to the prime minister questioning police reform.

Pol Lt Col Jan Chaisawasdi, an inquiry officer at Thian Thalae police station in Bangkok's Bang Khunthian district, was found hanging from railings at the back of of his home in Bang Bon district.

An initial police investigation pointed to suicide, police said. His body was sent to Siriraj Hospital for a post mortem.

Investigators said Pol Lt Col Jan on Wednesday morning opened the gate for his wife and daughter to drive to work. At about 3pm, he went to Thian Thalae police station to discuss work with his boss, Pol Col Yos Withitpaphathamrong, the station chief. 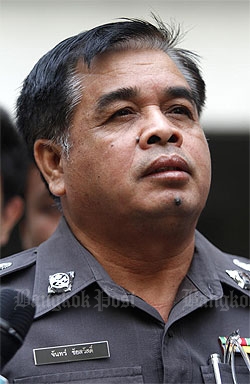 On Thursday, his colleagues at the police station phoned him but he did not answer the call. According to his colleagues, the officer did go to work that day. His family did not see him that night but they did not think it was unusual as he often returned home late, police said.

on Friday morning, his daughter was about to leave for work when she found him hanging lifeless at the back of the house. The family believed Pol Lt Col Jan died about 1am yesterday morning.

Acting Metropolitan Police Bureau chief Sanit Mahathaworn said police were investigating and nothing had yet been ruled out. He also said no disciplinary investigation had been launched against Pol Lt Col Jan after he petitioned for a review of the National Council for Peace and Order's (NCPO) order to abolish the inquiry officer role in the force.

Arom Chaisawasdi, Pol Lt Co Jan's wife, said her husband was delighted knowing he had passed a senior officer's exam and was to be promoted, adding she did not think he was under any kind of stress that would lead him to commit suicide.

Pol Col Yos, his boss, said Pol Lt Col Jan was normally a cheerful man and a party was being planned to celebrate his promotion. Pol Col Yos said he had no idea what happened to his colleague.

Pol Lt Col Jan was the secretary-general of the Confederation of Police Inquiry Officers (interrogators), who on Monday lodged a complaint with Prime Minister Prayut Chan-o-cha through the government complaints centre near Government House.

The petition asked for a review of the role abolition order issued on Feb 5 by Gen Prayut as NCPO chief.

The order, which will take effect on Feb 20, scraps the position of police inquiry officers. Inquiry officers will instead become deputy inspectors or commanders.

Pol Lt Col Jan passed his senior inquiry officer examination last year and was due to be promoted to police colonel holding the post of inquiry officer (advisory level) next Monday. The rank is equivalent to a superintendent, a police source said.

He questioned the assumption of suicide, pointing out that the officer was due to be promoted next week.

In the letter, he urged the government to allow the Department of Special Investigation to take over the case from police.

Mr Watchara said Pol Lt Col Jan had told him he was under pressure from his supervisors after lodging the complaint on Monday. He then lost contact with him for two days, he said, adding murder could not be ruled out at this stage.

A part of the song goes: When the bosses visit police stations, police who play host must welcome them with great fanfare. Food must be prepared to satisfy the bosses' palates. If the bosses scratch their shirt pockets, cash must be put in there. If they clear their throat, we must find girls for them ... When the bosses order anything, we must say "Yes, Sir!, Right away, Sir!"

Deputy Premier Prawit Wongsuwon said he did not think the officer's death had anything to do with the NCPO order.