Department of Special Investigation officials explain the complex, illegal process in importing and registering the controversial vintage Mercedes-Benz owned by the supreme patriarch nominee, at DSI head office in Bangkok on Thursday. (Photo by Tawatchai Kemgumnerd)

The supreme patriarch nominee's vintage Mercedes-Benz is a limited edition classic with only 100 ever built, and was imported and registered illegally, the Department of Special Investigation (DSI) stated on Thursday.

"It is a classic Mercedes-Benz of the 300B series manufactured in Germany in 1953. It is about 60 years old and only 100 units of the model were produced. So it is categorised as a beautiful and classic collectible. Its price is evaluated at 10-20 million baht," DSI director-general Paisit Wongmuang told a media briefing in Bangkok.

Pol Col Paisit said the vehicle's engine and body had been declared as being imported separately from the United States on Sept 17 and 19, 2010. Other parts including the boot lid, bonnet, lamps, doors and bumpers were declared as being bought from a bogus "Saichol Motor" partnership.

The DSI viewed that as an attempt to evade import duty levied by the Customs Department, he said.

Phra Maha Sasanamunee, assistant abbot of Wat Paknam Phasi Charoen and secretary to Somdet Phra Maha Ratchamangalacharn, then ordered the "assembly" of the Benz, which was quoted at 4 million baht by two operators: Odd 89 Enterprise partnership and a Wicharn garage.

Odd 89 Enterprise claimed to be the importer of the engine and the body. Neither of the two were authorised to assemble a vehicle.

Then a document was forged to show that NP Garage sought to pay excise tax on the Benz. The signature of the NP Garage owner was forged on the document, and it actually was a car-painting garage incapable of assembling a classic car, the DSI chief said.

A broker was then hired to present a document showing the excise tax payment and register the Benz with the Land Transport Department. The registration application also contained false information stating that Kanjana Makmuean, the owner of NP Garage, sold the car to the senior monk and a fake receipt was made to support the sale claim.

In the process of the registration application, another false document was produced claiming that STY partnership had assembled the car at a price of one million baht.

The signature of Somdet Phra Maha Ratchamangalacharn, also known as Somdet Chuang, appeared in a document presented for the registration in July 2011. The DSI would find out if the signature was genuine and conclude in a few months whether or how the supreme patriarch nominee would be held responsible, Pol Col Paisit said.

Korrawat Panprapakorn, DSI's director of technology and cyber crime, said there was a team providing such "reassembled" cars, most of which were expensive.

People involved with the case involving the vintage vehicle were liable to be charged with at least 10 offences including tax evasion, possession of a vehicle dodging tax, false declaration, unauthorised production and document forgery, he said. 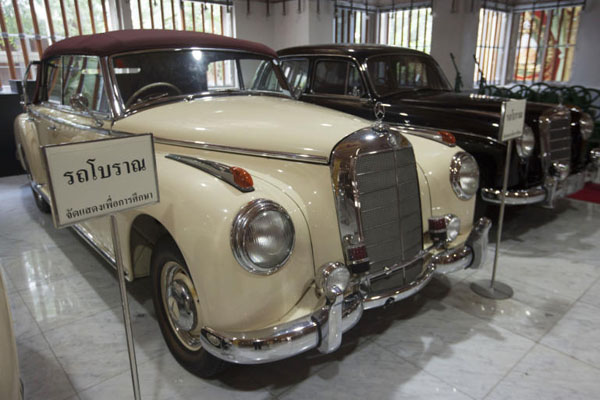 As the economy shrivels and millions are plunged into poverty, Thailand's super-rich flaunt their immunity to the fallout from Covid-19.