Secret stockpile could have made 10 bombs — police

The bomb planted at Ratchaprasong intersection shrine on Aug 17 killed 20 people and turned a popular tourist site into a scene of carnage. Another device, planted at the Chao Phraya Princess pier on Soi Charoen Nakhon 61, might have inflicted much greater casualties, said a leading security analyst.

Bomb squad chief Pol Col Kamthorn Auicharoen's disclosures to Reuters bolster a widely held theory that the perpetrators of the shrine bombing were trying to kill Chinese tourists. Police have maintained that the motive for the Erawan bombing was Thailand's earlier crackdown on human smuggling networks.

But many analysts, diplomats and even public officials say the Aug 17 bombing was likely an act of revenge for government's deportation to China of more than 100 Uighur Muslims in July.

Acknowledging that Chinese tourists were intentionally targeted could dent the important tourism industry. A record 7.9 million Chinese visited the kingdom in 2015, or more than a quarter of the 28 million tourists that year.

Tourism is one of the few thriving sectors of an economy that has floundered since the military seized power in a May 2014 coup.

When asked about the Bangkok bombers' possible targeting of Chinese citizens, Foreign Ministry spokeswoman Hua Chunying told reporters on Thursday that attacks against civilians around the world, including Chinese, were increasing.

"We believe Thai authorities can severely punish the murderers according to law," said Ms Hua.

Thai police have uncovered evidence in the shrine bombing that points to a large and well-organised network, according to experts and documents reviewed by Reuters. Dangerous chemicals and other materials discovered in Bangkok apartments connected to two suspects could have made 10 more bombs, said Pol Col Kamthorn, the bomb squad chief.

Yusufu Mieraili and Bilal Mohammad, the two suspects arrested last year by Thai police, are Uighur Muslims from China's restive Xinjiang region. Hundreds of people have died in recent years in unrest in Xinjiang, where most Uighurs live, and in attacks elsewhere in China attributed to Uighurs.

Exiles and human rights groups say those Uighurs engaging in violence are lashing out at oppressive government policies that restrict their culture and religion. Beijing denies this and blames Islamist militants for the rise in violence.

The two suspects appeared in a Bangkok military court on Feb 16 to hear the 10 charges against them, including murder and illegal possession of explosives. Both men say they are innocent.

Police have issued arrest warrants for 15 other suspects, many of whom are thought to be Turkish or in Turkey. Police turned down repeated requests by Reuters for information about the investigation. National police chief Chakthip Chaijinda declined several interview requests.

The military indictment, which Reuters reviewed, accuses the men of planting the first bomb at the Chao Phraya Princess Pier at 4.30pm on Aug 17 when hundreds of Chinese tourists had gathered to board dinner cruises along the river.

It failed to detonate, and after two or three hours, was taken away by a blue-shirted figure named earlier as Zubair Abdullah, but identified in an arrest warrant as only an "Asian man".

He was then caught on security cameras further upriver, kicking a bag thought to contain the bomb into a canal at Sathon pier. It exploded harmlessly the next day.

The Erawan shrine bomb went off at around 7pm on Aug 17, killing mostly Chinese or ethnic Chinese tourists. Pol Col Kamthorn believes the bomb "might not have happened" had the bomb at the pier functioned.

Assuming it was a target on Aug 17, the pier would "certainly make sense" because it caters almost exclusively to tour groups mainly from China, said Anthony Davis, a Bangkok-based analyst at security consulting firm IHS-Jane's.

"Had a device similar to that used at the Erawan shrine exploded there, casualties would almost certainly have been significantly higher and overwhelmingly from mainland China," he said. 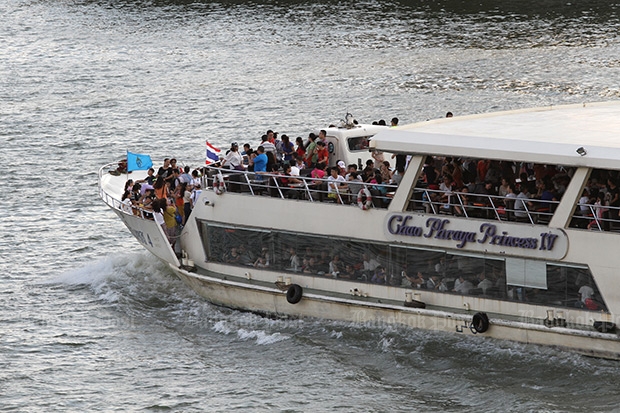 The choice of the pier, which doesn't cater to regular commuter ferry services, suggested the attackers had "clearly done their homework," Mr Davis added.

"Most Bangkokians would be unaware of the existence of this pier and its importance to the Chinese tourist industry in the city," he said.

The attackers had also stockpiled a long list of chemicals and explosives at two Bangkok apartments, according to the indictment by military prosecutors seen by Reuters.

These included two, five-litre bottles of what the indictment said was triacetone triperoxide (TATP), a highly unstable explosive which has long been favoured by militants.

The seven men who attacked Paris in November, killing 130 people, wore suicide vests packed with TATP. It was also used in the London attacks in 2005 and by "shoe-bomber" Richard Reid who tried to blow up an airliner in 2001.

"TATP has no commercial or military application, is only encountered in terrorist weapons and devices, and must be synthesised," said Sean Doyle, formerly principal scientist at the Forensic Explosives Laboratory, an agency of Britain's Defence Ministry.

Also found in the Bangkok apartments were three chemicals which, according to global security consultancy Allen Vanguard Counter-Threat Solutions (AVCTS), could have made another 20-30kg of TATP, depending on the method used and other factors.

The number of potential bombs this could have made was "variable" and depended on the size of the devices, said AVCTS.

A police document, seen by Reuters, detailed other materials found at the apartments.

These included dozens of short pipes, similar to those police believed were used in the two Bangkok bombs, as well as bags of ball bearings, commonly used as shrapnel.

The Chao Phraya Princess pier was still crowded with Chinese tourists when Reuters reporters visited recently. The unarmed soldiers who now patrol the area for suspicious packages said the pier had recently been fitted with extra security cameras.

One soldier pointed over the heads of waiting passengers to a spot near a waste bin where he said the bomb had been planted.

"I don't want to think what would have happened if it had exploded," he said, declining to give his name. "Look at how many people are here."