Tigers are seen behind a fence at the Tiger Temple in Kanchanaburi province on Thursday. (Reuters photo)

The controversial Tiger Temple, dogged for years by talk that it supplies the black market and mistreats its animals, is fighting to keep the big cats after wildlife authorities rejected a bid to extend a zoo licence that expired in 2013.

The Buddhist temple, home to more than 100 tigers, has been investigated for suspected links to wildlife trafficking and wildlife activists have accused it of illegal breeding of the animals.

Wildlife authorities have sent 10 of the temple's tigers to a wildlife sanctuary.

But the temple, which bills itself as a wildlife sanctuary, has denied links to illegal trafficking, and wants to hold on to its tigers.

"This is their home. They are happy here," said Supitpong Pakdijarung, an official of the foundation that runs Wat Pa Luang Ta Bua, as the temple is known in Thailand.

"The government has to find a budget to take care of them," Mr Supitpong, the body's deputy chairman, told Reuters. "Here, the money comes from donations. It is about giving and generosity."

Mr Supitpong denies accusations that tigers bred at the temple have been sold on the black market.

But the allegations of mistreatment of tigers had dented Thailand's tourism image, said Teunchai Noochdumrong, director of the country's Wildlife Conservation Office.

"The world is looking at us," he added. "The temple did not allow officials to enforce the law. The temple has affected Thai tourism."

In the past, attempts by wildlife officials to inspect the tigers have been blocked by the temple and its abbots.

Thailand has long been a hub for illegal wildlife trafficking, as a place where everything from exotic birds to reptiles, and even bears, is for sale, driven by international demand for exotic meats and rare pets.

Successive governments have launched campaigns to curb the trade in illegal wildlife, but with varying degrees of success.

One visitor to the temple said the tigers should be left there, rather than being confiscated.

"These animals are used to being around people," said Victoria Carpenter, an American tourist. 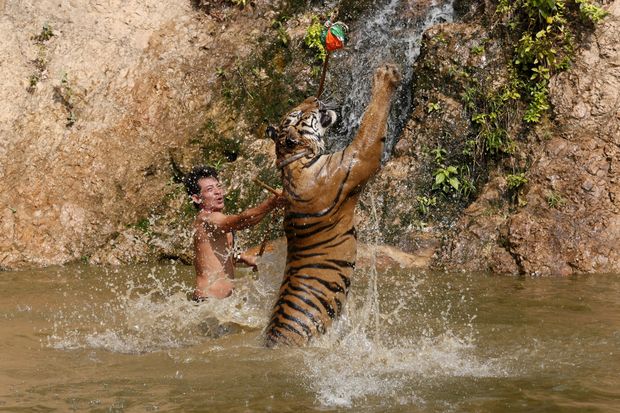 A tiger jumps while being trained at the Tiger Temple. (Reuters photo) 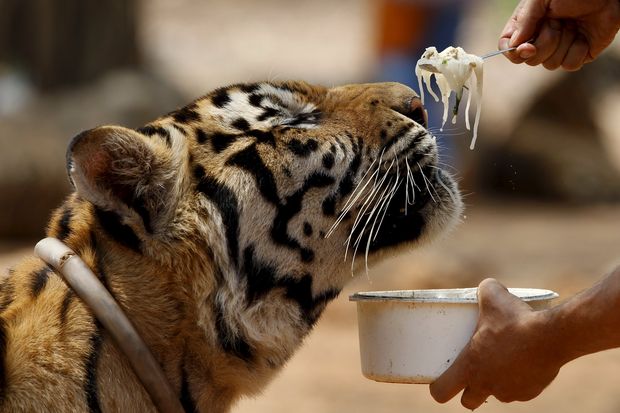 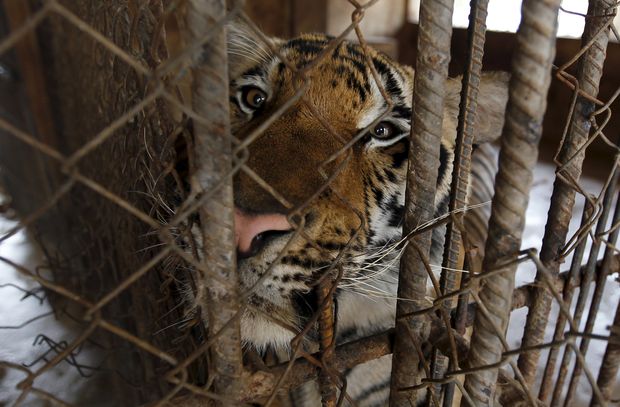 A tiger is seen in a cage. (Reuters photo)