Engineers and officials from the Marine Department check the safety of Khlong Saen Saep commuter boats anchored for maintenance, following the explosion on a Khlong Saen Saep ferry that injured 67 passengers on Saturday morning at Wat Thep Leela pier in Bangkok. (Photo by Pattarapong Chatpattarasill)

Public transport authorities will meet Monday to discuss safety measures for commuters following the explosion on a Khlong Saen Saep boat on Saturday.

Deputy Transport Minister Ormsin Chivapruck, who called for the meeting, said it would sound out measures to ensure safety for passengers on public transport, particularly commuter vehicles or boats fitted with dual-fuel gas and diesel engines.

The blast took place while the boat, carrying about 80 passengers, was docking at Wat Thep Leela pier in the early morning. Police believe the explosion, which injured 67 passengers, was caused by a gas leak. The vessel is fitted with a dual-fuel liquefied natural gas (LNG) and diesel engine.

The gas had leaked from the pipeline connecting a gas tank and the engine, a preliminary probe found. Heat from the engine then ignited the gas.

Marine Department deputy director Nat Chubchai said he will sign an order Monday to bar Family Transport Co, which holds the concession for boat services on Khlong Saen Saep, from using the gas system in its commissioned vessels.

More frequent checks will be carried out on the company's commuter boats, while the canal piers will be improved to ensure more safety for passengers, Mr Nat said.

He said the department had devised a vessel design that better suits the boat service in Khlong Saen Saep. They will be enclosed boats, which should be unveiled within two years, Mr Nat said.

He said the department also ordered all public boat operators to cancel the use of LNG. The violators could have their operation licences suspended and face legal action. The operators have cooperated well with the department, Mr Nat added. 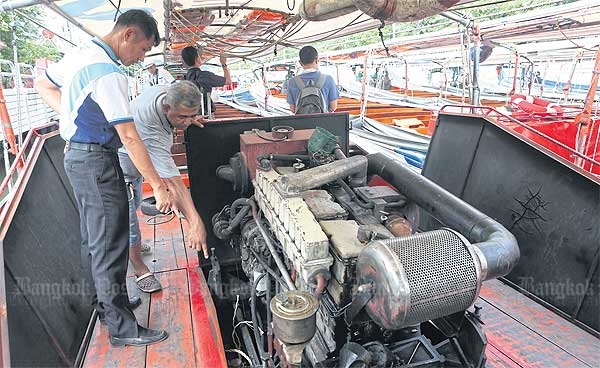 An officer from the Marine Department checks the safety of Khlong Saen Saep commuter boats following the explosion on a Khlong Saen Saep ferry that injured 67 passengers on Saturday morning at Wat Thep Leela pier in Bangkok. Pattarapong Chatpattarasill

Narayu Pitayapreechanon, head of the department's boat equipment standard unit, said his team checked the 45 diesel-powered boats of Family Transport Co Sunday and they were all in reasonable shape.

The team has not checked the 25 gas-fuelled boats since the company suspended them on Saturday, he noted.

Chavalit Metayaprapas, the owner of Family Transport Co, said his staff Sunday pumped out gas from all the gas-fuelled vessels, which will later have their gas systems removed.

He said injured passengers can seek assistance from the company.

Pol Col Sarayut said the gas tank-fitting engineer told investigators the safety system of the gas container still functions normally and he could not understand what caused the explosion.

No charges have been laid. If the evidence shows the incident was caused by the negligence of the captain, he would face a charge of causing serious injury, Pol Col Sarayut said. 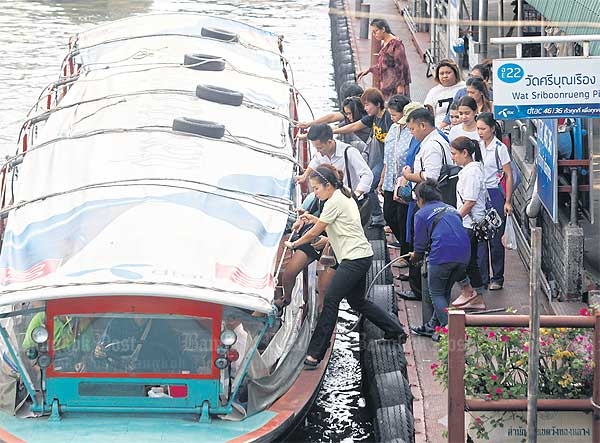