Authorities reminded sky watchers on Tuesday to avoid looking at the sun with the naked eye during a partial solar eclipse visible, weather permitting, across the kingdom Wednesday morning.

"Anybody wanting to watch the solar eclipse should prepare glasses or look at it through x-ray film," Douangkaew Allapach, acting director of the Science Centre for Education in Yala said on Tuesday. 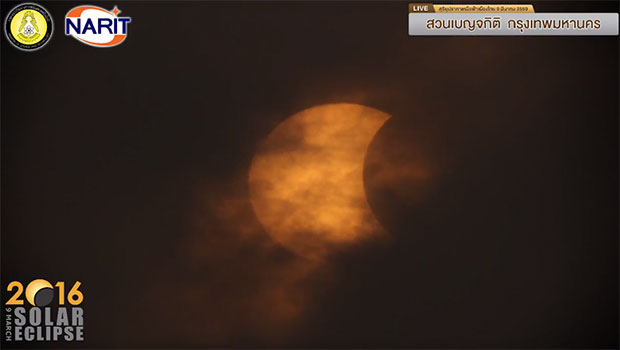 The image is captured from the live streaming of the solar eclipse at Benjakiti Park in Bangkok by the National Astronomical Research Institute of Thailand (Narit) at 7.09am.

Check the live streaming from Bangkok at https://www.youtube.com/watch?v=_3GrRH4P5NI. 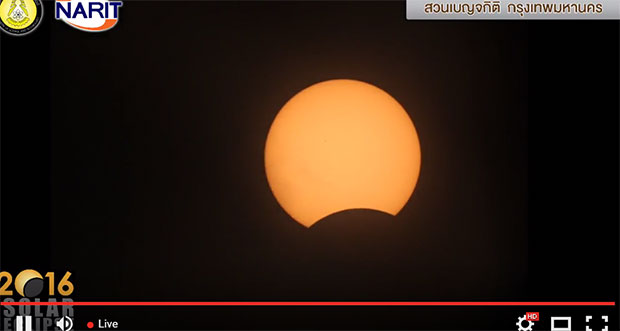 The image is captured from live streaming from Bangkok at 8.18am. 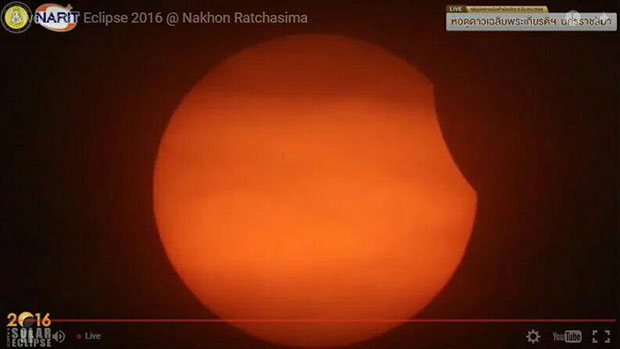 The image is captured from the live streaming from Nakhon Ratchasima.

Eclipse chasers in Thailand can see it between 6.20am and 8.40am on Wednesday depending on location. Betong district in Yala, the southernmost point in the country, will see 69% of sun obscured, while residents in Chiang Rai, one of the northernmost provinces, will get less than of the astronomical phenomenon at 23%. Bangkok will see a 41% eclipse.

A total eclipse can be seen in Indonesia.

The National Astronomical Research Institute of Thailand (Narit) has prepared five venues for watchers from 6am to 10am. People in Bangkok can see it at Benjakiti Park. Other observation points are on top of the Central Festival shopping centre in Chiang Mai's Muang district, Samila beach in Songkhla town, an observatory at Suranari University of Technology in Nakhon Ratchasima and another one in Plaeng Yao district in Chachoengsao.

"Telescopes and other high-quality equipment will be available for watchers. Narit has experts to explain the event to them," Narit deputy director Saran Poshyachinda said.

The solar eclipse comes four days after the day Uranus entered the Taurus zodiac sign for the first time in 84 years on Sunday. That sparked worries that the two phenomena could cast bad luck on the country.

People flocked to temples on Sunday to make merit for good fortune on the occasion.

But Chalermchai Boonyaleepan, a deputy chairman of the health affairs committee of the National Legislative Assembly and Narit representatives, dismissed the fear on Monday, saying that the natural phenomenon on Wednesday could not influence the fortune of the country and lives.

People missing the partial eclipse of the sun on Wednesday morning have to wait until 2019 for their next chance at a partial eclipse and 54 years more for the next total eclipse in Thailand.

The Civil Aviation Authority of Thailand (CAAT) stressed that all airlines must strictly check the Certificate of Entry (CoE) of all foreign passengers before they arrive in Thailand, in compliance with the Foreign Ministry's screening guidelines.

Tourism operators in Krabi are urging the government to procure enough vaccines and establish clear regulations for national parks in preparation for the area's sandbox to open on Oct 1.