A survey by the Foundation for Consumers has found about 17% of the fresh <i>kanom jeen</i> noodles sampled at fresh markets contained excessive amounts of the preservative benzoic acid.

The foundation examined random samples of packaged ready-to-eat kanom jeen noodles (made from fermented rice, usually served with curry or sauces) from 12 producers. All the samples contained benzoic acid and 10 of them (about 83%) were within the maximum limit of 1,000 milligrammes per kilogramme.

Two samples (about 17%) had excessive amounts of the preservative. One sample bought from Ying Charoen market and sold under the Star brand had 1,121.7mg/kg, and the other sample, bought from Saphan Khao market with no trade brand, contained 1,115.2mg/kg of benzoic acid. 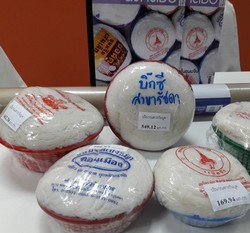 Kanom jeen noodles on sale at a fresh market.

Monrudee Phoin, the foundation’s science academic, said a person should not ingest more than 5mg of benzoic acid preservative per kilogramme of body weight. For example, for a person weighing 45kg the maximum safe intake per day of the preservative would be 45x5 or 225mg.

She said the issue of concern was that consumers were surrounded by foods containing preservatives, without knowing the exact amount of each substance. Consumers could be ingesting too much of the preservative, at toxic levels, without being aware of it. It could cause illness, shortage of breath or even unconsciousness.

Long term over consumption may also lead to colon cancer, or reduced liver or kidney function that could lead to loss of life.

Ms Monrudee suggested consumers to eat a variety of foods to reduce the risk of accumulating toxic residue in the body.

She said benzoic acid could be eliminated by cooking, but kanom jeen was normally consumed without heating, thus increasing the risk of consumers ingesting excessive amounts.

Secretary-general Saree Ongsomwang said the foundation would submit the results of its survey to the Food and Drug Administration and hoped the FDA authority would require producers to clearly label their products, listing the amount of preservatives and other substances, so consumers could to make own decision.

FDA chief Tipawan Prinyasiri said kanom jeen sold in packages is required to have a label listing the ingredients and manufacturing date. The authority had not been strict in enforcement but it would later instruct all provincial health offices to effectively enforce the law.

Producers found violating the labelling regulations face a fine of up to 30,000 baht, and those whose products have substances exceeding the safe standard  face a 50,000 baht fine.