PHUKET -- An Estonian-American shot himself dead at a shooting range on the hill to Patong beach of this island province on Wednesday afternoon.

Police, forensic officers and doctors were called to the shooting range at around 1.45pm on Wednesday.

A police investigation found that the Estonian native, whose Facebook page said he resided in the US, apparently looked stressed and smoked several cigarettes before going inside the shooting range. 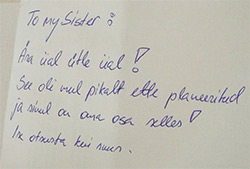 A portion of a suicide note found at the scene. (Photo by Achadtaya Chuenniran)

He fired seven shots at a target using an STI pistol provided by the shooting range before firing into his right temple.

Police found two letters on him – one for his Thai wife identified later as Ratchanee and the other for his elder sister.

In the letter written to his Thai wife, he asked her to tell his relatives to send his body back to his country for funeral rites. In the other letter, he told his sister and relatives to ask Ms Ratchanee about the motive for his suicide.

Staff at the shooting range told police that the man went to the venue alone by hired motorcycle.

The officers will call in Ms Ratchanee for questioning.

Last year, a 21-year-old British man shot himself at a shooting range in Thalang district.