NAKHON RATCHASIMA — Three senior police officers have been transferred to inactive posts following an army raid on a gambling den that resulted in 26 arrests.

Pol Col Pathiyut Singsomrot, superintendent of the Muang district station, was not affected by the transfer because he was on leave at the time of the raid.

Pol Maj Gen Thakul Nattheesri, the Nakhon Ratchasima police chief, told reporters on Saturday that a committee had been set up to investigate the three officers for alleged negligence.

On Friday, a military task force raided a second-floor room above the Hom Ocha noodle shop on Mukmontri Road in downtown Nakhon Ratchasima. Twenty-six gamblers were arrested and officers seized 22 decks of playing cards, a gaming table, and more than 150,000 baht in cash.

Authorities said Sitthichok Wongwai admitted to being the operator of the gambling den. He was held in police custody for legal action.

Apisorn Phoothong, 45, the owner of the noodle shop, told police he had rented the second floor of his shop to a new tenant just a few days before the raid was conducted. He claimed he received 3,000 baht a day in rental fees.

Pol Maj Gen Thakul said he had asked all 51 police stations in the northeastern province to seriously crack down on gambling dens and vice.

The military government this week said it was preparing to go after as many as 6,000 "influential" figures nationwide as it steps up its campaign against criminal activity. 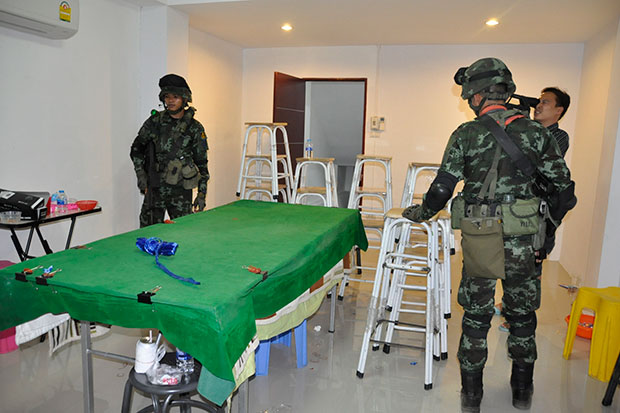 Soldiers raid a gambling den on the second floor of a Nakhon Ratchasima noodle shop, the owner of which was receiving 3,000 baht a day to rent the space. (Photo by Prasit Tangprasert)

CHAIYAPHUM: More than 3,o00 houses in 23 villages in Bamnet Narong district are suffering under what is said to be the most severe flooding in 100 years.