The government's much vaunted Special Economic Zones (SEZs) are under scrutiny amid reports of land grabs by foreign firms dodging the law on foreign acquisitions by having Thais act as nominees.

The move follows a recent probe of five companies in the SEZ in Songkhla's Sadao district by the Commerce Minsitry's Business Development Department, the Department of Special Investigation and some soldiers on suspicion the firms, which have foreign shareholders, are violating foreign business laws by using Thai nominees.

A complaint has been lodged with police in Sadao district to initiate a criminal investigation.

The findings have raised concerns about the development of SEZs and authorities will direct their attention to the SEZs in 10 provinces, she said.

Current (blue) and planned (red) SEZ (Courtesy of Board of Investment)

"We've learned from this investigation that many foreign investors have turned their focus to SEZs in border areas after previously setting up such companies with Thai nominees mostly in tourist destination provinces," the director-general said.

The department has also looked into the companies' accounting practices and detected flaws, she said, adding charges will be pressed against the firms if they are unable to clarify them.

"There are several more companies in those provinces which we are probing the use of nominees," Ms Pongpan said while paying an inspection visit in Chiang Mai on Sunday.

Under the Foreign Business Act, Thai nationals found to have breached the law face a three-year jail term and/or a fine of 1 million baht plus a daily fine of up to 50,000 baht.

The Commerce Ministry will seek cooperation from various agencies including governors and local administrations to investigate the nominee issue.

Pol Col Songsak Raksaksakul, deputy director-general of the DSI, has echoed the concerns, saying the agency is flooded with complaints about the use of Thai nominees especially for land holding purposes.

The complaints are rife not only in tourist provinces such as Phuket, Phangnga and Krabi, but also in SEZ provinces like Chiang Rai, Sa Kaeo and Mukdahan, he said.

In several cases investigated by the DSI, the companies suspected of using Thai nominees do have proper documents, he said, adding some foreigners have circumvented the law by marrying Thai nationals and having their partners hold the shares.

He said the use of Thai nationals as nominees, if left unattended, can have adverse impacts on national security in addition to the security of national resources.

Kitti Thitsakul, secretary-general of the Northern Tourism Federation, said Chinese investors are moving into the northern provinces and are targeting the agricultural and service sectors.

He said several Chinese investors have married Thais and conduct businesses through their partners.

A source close to the tourism industry in Chiang Rai said land grabs are widespread in the province by Chinese investors through the use of Thai nominees.

Several warehouses, shipping companies and businesses in the hospitality sector are also said to be controlled by foreigners.

Meanwhile, activities in the SEZ in Sa Kaeo are expected to go into full swing in the middle of this year, said Pramuan Khiewkham, secretary-general of the province's chamber of commerce.

He said at least six companies have expressed interest in the SEZ after the Treasury Department signed a contract to rent out state land covering 600 rai in Aranyaprathet district to the Industrial Estate Authority of Thailand for the SEZ development.

He also said the price of land plots near the SEZ have also increased. Some plots are selling for 3-4 million baht per rai, against the usual prices of 60,000-100,000 baht per rai. 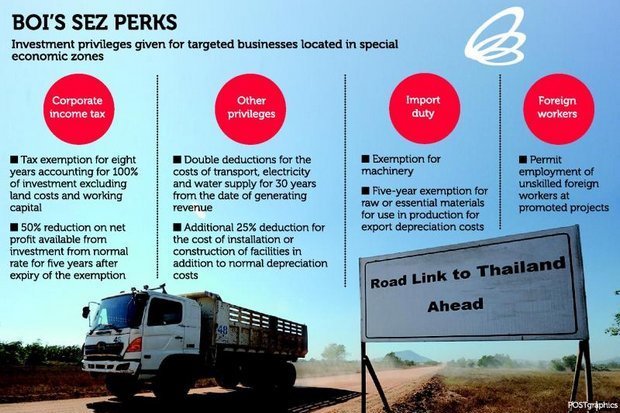