At a Lampang temple on Thusday, Kriangkrai Techamong, left, who stole the Saudi jewellery, chatted with ex-police lieutenant generalChalor Kerdthes, who killed for it. The two men were at the centre of the 1989 Saudi jewellery theft and subsequent fallout, sometimes called the Curse of the Blue Diamond. (Main photo by Aswin Wongnorkaew)

The paths of two men -- whose downfall in life followed their high-profile convictions in the "Blue Diamond Affair" almost three decades ago -- crossed again at a rural temple in Lampang yesterday.

At 78, Chalor, now partially paralysed and confined to a wheelchair, arrived at the ordination rite in the morning. He was released on parole in 2013 after serving 19 years in jail for murder in connection with the 1989 Saudi jewel theft case.

Chalor said he hurried to the rite after hearing Kriangkrai was entering the monkhood. He wanted any ill feeling between them to be cleared up and to seek atonement for the wrongs they may have done to each other.

The former deputy police commissioner handled the investigation into the Saudi jewellery recovered from the theft. However, after the items were returned to Saudi Arabia, several of them were found to be fake.

"Those involved in the Saudi diamond saga and I have been through a lot. I truly believe the diamonds were a bad omen," the former deputy police commissioner said. 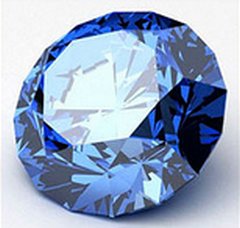 This is supposedly what the "50 carat" Saudi Blue Diamond looked like when last seen almost 30 years ago. (File photo)

Kriangkrai said he has put the past behind him now that he has embarked on a religious journey in a saffron robe. He said he hoped his ordination would change his luck.

"The merits and good deeds I will practice from here on will be dedicated to the guardian spirit and to the individuals still with us or no longer with us, who are connected to the diamond trial," he said.

Kriangkrai chatted with Chalor for a while before the ordination, a low-key ceremony attended by about 20 relatives and family members.

Kriangkrai, 60, was bestowed the monastic name of Wachira Yano, meaning "one with a wisdom as strong as a diamond".

Chalor, accompanied by family, clapped and performed a wai high above his head in a gesture of deep respect to the newly-ordained monk. He also dropped some money as alms into Phra Wachira Yano's bowl as the monk was leaving the chapel.

Chalor said he is leading a simple life at home in Tak where he farms mushrooms.

The jewellery heist case harks back to 1989 when Kriangkrai, a former janitor, sneaked into the home of Saudi Prince Faisal late at night and stole the gems that he later smuggled into Lampang, triggering a feud between Thailand and Saudi Arabia dubbed the "Blue Diamond Affair" that has yet to be resolved.

Police later returned some of the jewels, but Saudi officials claimed most were counterfeits while the whereabouts of the most precious gem -- a rare 50-carat blue diamond -- remains unknown. Saudi Arabia has long accused Thai police of bungling its investigation. Riyadh sent a businessman to conduct his own investigation, but he disappeared in Bangkok days after three Saudi diplomats were shot dead, execution style, in the city.

In 2014, a case was dropped against five men, including a senior Thai policeman, for alleged involvement in the businessman's murder over lack of evidence. The case has strained relations with Saudi Arabia.

In 2009, Chalor was sentenced to death by the Supreme Court for murdering Darawadee Srithanakhan, the wife of a gem trader, and her son, Seri, in 1994. The sentence was later reduced to 50 years by a royal pardon. Darawadee's husband, Santi Srithanakhan, allegedly purchased some of the 500 million baht worth of jewels that Kriangkrai stole.

Chalor was released on parole in 2013 due to old age and illness.