The Office of the Auditor-General has weighed in on the so-called Panama Papers, asking the Revenue Department to look into tax payment records of Thai nationals named in a list of people allegedly using a Panama-based law firm for offshore holdings.

However, Justice Minister Gen Paiboon Koomchaya and the business community are urging the public not to rush to conclusions and let regulators verify the information first.

They said that while the leaked documents might show possible wrongdoing, including alleged money laundering and tax evasion, using offshore company structures is a normal and legal business practice.

The state audit office's move comes hot on heels of the Anti-Money Laundering Office's (Amlo) efforts to obtain information from its foreign counterparts regarding the number of Thai individuals mentioned in leaked documents that revealed the hidden offshore assets of world leaders and celebrities.

The documents, from around 214,000 offshore entities covering almost 40 years, came from Mossack Fonseca, a law firm in Panama with offices in more than 35 countries.

Regarding Thailand, almost 400 Thais among 780 individuals who used Thailand as a residence and 50 companies were named on the lists. 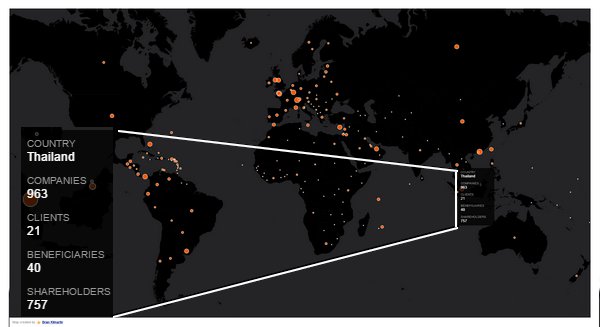 World map made from the International Consortium of Investigative Journalists (ICIJ) data shows the extent of the Panama Papers scandal and the allegations from Thailand.

The International Consortium of Investigative Journalists (ICIJ) which released the lists also said there are legitimate uses for offshore companies and trusts and it does not intend to suggest or imply that those named in the leak have broken the law or otherwise acted improperly.

Gen Paiboon said the contents of the papers need to be examined and verified and the public should not rush to conclusions.

According to the justice minister, offshore companies could be used to facilitate foreign investments, not only illicit activities.

"At this stage the leak is not verified information. But once it's verified, no one can dodge an investigation. So let Amlo work on this first," he said.

Auditor-General Pisit Leelavachiropas, however, said he has seen the list and had proceeded to ask the tax authority to review tax records to detect any possible wrongdoing.

"In the initial stage, we look at their tax records ... see if the payments reflect their wealth," he said, adding the Revenue Department is authorised to look at records from the last five years.

According to Mr Pisit, the anti-money laundering agency is another regulator that can step in.

He also suggested that the Centre for National Anti-Corruption (CNAC) can facilitate the probe by acting as a coordinator as it is the hub of 11 anti-corruption agencies.

Prime Minister Prayut Chan-o-cha said yesterday relevant authorities have launched an investigation and are working to verify the information before further steps can be taken.

According to Gen Prayut, the government has set up a working panel to follow up on this issue that will also monitor the flow of information and actions taken by other countries.

Isara Vongkusolkit, chairman of the Thai Chamber of Commerce, whose name is on the lists, said he did not know and had noting to do with Mossack Fonseca. He was wondering how his name was mentioned on the lists.

However, Mr Isara admitted that offshore holdings were necessary for transnational business in the past as the country's regulations restricted bringing profits from overseas businesses back into the country.

For example, a businesses that made money in foreign countries had to pay tax overseas and be subject to double taxation when they brought the money into the country. In addition, they had to incur currency conversion fees.

A high corporate tax rate of 30% was among the reasons for businesses using offshore structures. Companies had to pay 30% corporate taxes when they brought in the capital, on top of the 20% tax paid to the country of investment.

As a result, it was normal practice to leave the money offshore if there was no need to use the money in the country for the sake of efficient management, he said.

Mr Isara said the public should distinguish between legal offshore transactions and illegal ones that include money laundering.

He said he is ready to cooperate with authorities though he questioned the validity of the information.

Banyong Pongpanich, chairman of Phatra Capital and a member of the State Enterprises Policy Commission, posted a message on his Facebook page saying he was taken aback that his name was on the list.

"I have just learned of the company today and I never contacted or did any business with Mossack Fonseca," he wrote, adding that he would find out how his name appeared on the lists.

Adm Bannawit Kengrean, former deputy defence permanent secretary, whose name is also on the lists, said this came as a surprise to him.

According to the retired officer, he never conducted any business transactions overseas or given permission to anyone to use his name to set up offshore accounts.

Pol Col Seehanat was attending a meeting on anti-money laundering in Myanmar.