A police officer moves one of the controversial signboards from a sidewalk in Chiang Mai's Muang district on Sunday. (Photo taken from Facebook of วิทยุจราจร จราจรเพื่อชุมชนเชียงใหม่)

Chiang Mai police on Sunday agreed to clear sidewalks of signboards that depict a senior officer surrounded by subservient women that were set up to promote the Songkran spirit and traffic discipline after numerous complaints.

Many people said the images contradicted the printed message and questioned the true intention of the police. The signboards show an image of Provincial Police Region 5 commissioner Tanitsak Teerasawat in uniform and two women in traditional Thai costume and were placed on sidewalks across the city.

The signboards have messages that read: “No drowsy driving. Promote Thai culture. Create Traffic Discipline”. Accompanying the messages is an image of Pol Lt Gen Tanitsak sitting on a bench and receiving a traditional Songkan rod nam dam hua blessing performed by women sitting on the floor.

Residents took to social media to complain that the presentation failed to communicate a core message to the public and was confusing. Many said the image was bizarre and not relevant to the wording. It also carried a slight sexual connotation.

Some accused the police of trying to please their commander by using him as a presenter and considered the material to be abnormal use of product placement.

Facebook user Yuttanagon Svangmek said: “I’ve seen it and I don’t get it. I have no idea what the image tries to say. Removing them is the correct decision.”

Another user Pakhin Chanthathadawong suggested police focus on the issue of road accidents only and drop the cultural part to avoid confusion. “Or do they just want to promote the presenter?”

“The picture reminds me of a wealthy man in the old days being looked after by woman slaves and concubines. It’s really not appropriate,” Apichai Saipet said.

Kawinphat Rot said he sympathised with the police for trying to wage a good campaign but were being attacked. He asked people to be open-minded.

He said the image showing a pooyai sitting in a high position and younger individuals sitting at a lower position, which was a normal practice in Thailand, though people might misinterpret it.

Chiang Mai traffic police posted a message clarifying the issue along with pictures of officers removing the contentious signboards from the city streets.

The message said officers only intended to promote road safety during Songkran in Chiang Mai where the accident rate sits high on the national list each year.

The division apologised if the campaign was inappropriate or hurt people's feelings and said officers were happy to listen to every opinion to improve their work. It thanked the public for monitoring them. 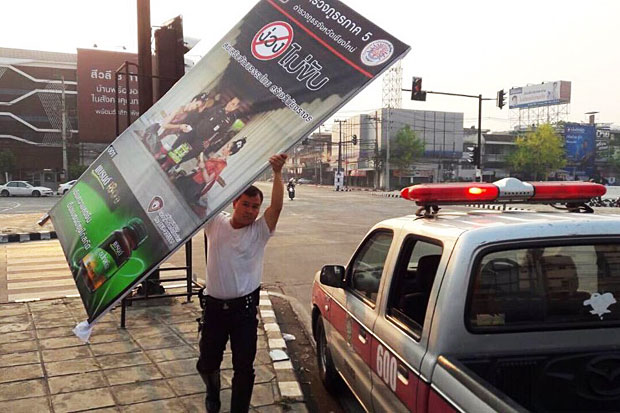