The Immigration Bureau is cracking down on bogus marriages involving illegal residents in its latest drive to battle transnational crime.

Bureau chief Nathathorn Prousoontorn said several foreign nationals are believed to have resorted to sham marriages as a loophole to stay in the country.

Pol Lt Gen Nathathorn said some people who enter into bogus marriages here have committed crimes in other countries and come to Thailand to hide. 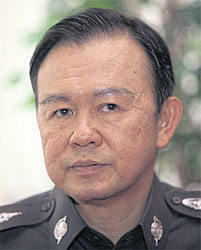 Nathathorn: Getting tough on opportunists

The agency received a tip-off from the Public Anti-Corruption Commission (PACC) that at least 150 Thai women in one district of a northeastern province had married foreigners in the past few months.

"The number is unusually high, and it triggers suspicions about marriage 'for hire'," Pol Lt Gen Nathathorn said.

The tip-off comes at a time when the government has tightened immigration controls and launched a crackdown on foreigners who overstay their visas as part of government efforts to tackle transnational crime.

Stricter punishments for those overstaying their visas have taken effect since March 20. Under new Interior Ministry regulations, foreign travellers who overstay more than 90 days will be banned from re-entering the country for one year.

People who overstay more than one year will face a re-entry ban of three years.

Foreigners caught in criminal cases and who also overstay will be barred from re-entering the country for five years.

Pol Lt Gen Nathathorn said that between October last year and March this year the bureau has deported a total of 486,947 foreigners who overstayed their visas and collected fines totalling 276 million baht.

Another 323,575 foreigners who overstayed their visas remain at large.

He said many of them might have used marriage as a means to "launder" themselves so they can stay legally without fear of deportation or being suspected of illicit activities.

Foreign nationals who are married to Thai women are granted a privilege that they are required to renew their visas once a year.

Pol Lt Gen Nathathorn said the bureau is also looking into the case of a South Korean national who was arrested early this month on narcotics charges to determine if his marriage to a Thai woman is fraudulent.

Jung Hyuneseok, 47, was arrested in Chatuchak district after warrants were issued by South Korea and Interpol for his alleged internet drug trafficking business.

The suspect, who also owned an aquarium fish business, was married to a Thai woman last year after several visits to Thailand.

He said he has instructed the bureau's legal team to review the laws and see which new charges can be pressed against couples involved in sham marriages.

So far they face a charge of making a false statement to state officials, he said, adding that a foreigner found to hire a Thai woman for marriage faces a re-entry ban up to 10 years.

Immigration police will also run checks with Interpol and authorities in their home countries to see if they have criminal records or have assumed new identities to evade laws.

However, Pol Lt Gen Nathathorn admitted it is not easy to prove a marriage is fake.

Immigration authorities will also investigate if Thai officials are involved in enabling bogus marriages and if they do they will face prosecution for assisting in crime.

The bureau chief said the new immigration regulations are expected to reduce the number of illegal entries, but it is impossible to bring it down to zero.

"Other countries with tough screening rules also face similar problems. Also, our country is promoting tourism, so we can expect exploitation of our policy," he said.

Pol Lt Gen Nathathorn said the Immigration Bureau is also stepping up a campaign against so-called visa runs in which foreigners make short trips to neighbouring countries and immediately return to Thailand with a visa to extend their stay for 15-30 days.

He said transnational criminals may resort to this practice as they try to lie low.