The recently discovered classic Thai film <em>Santi-Vina</em> has been selected to screen at the Cannes Classic section of the 69th Cannes Film Festival, the first time a Thai movie was honoured in the category reserved for vintage titles that celebrate cinematic art and heritage.

Made in 1954, Santi-Vina was thought to be lost, but its copies were discovered last year – through detective work and luck – at British Film Institute (BFI) as well as at film archives in Russia and China. The Thai Film Archive has commissioned a film lab in Bologna, Italy, to restore the deteriorating print. After 1,700 hours of work, the film will be shown for the first time in Cannes next month and later in Thailand. 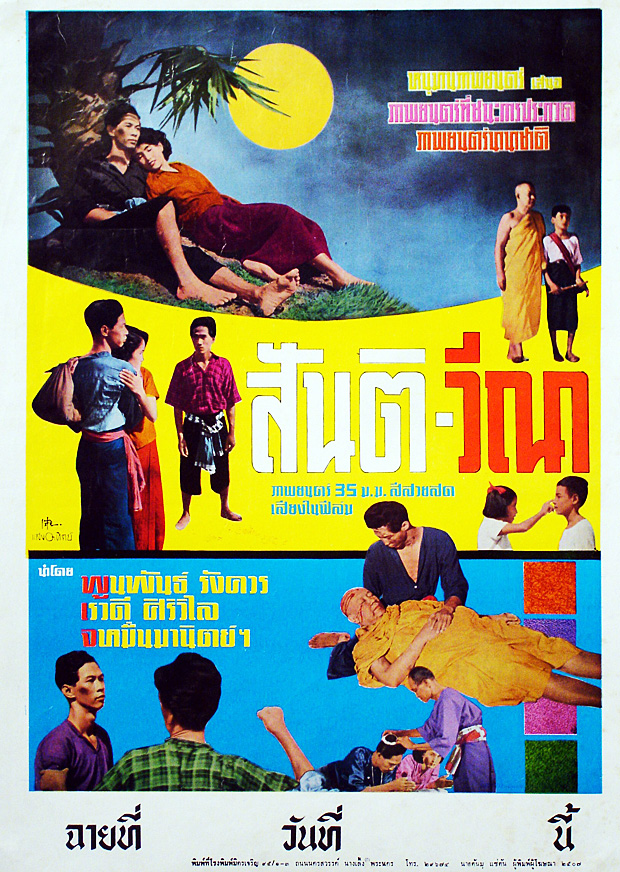 Set in a picturesque rural area, Santi-Vina is a story of doomed romance between a blind man and a beautiful girl, with a Buddhist element in the mix. It was made by Hanuman Pappayon, a studio founded by the legendary producer and cinematographer RD Pestonji. After the local release, the film was screened at the first Southeast Asian Film Festival in Tokyo and won two Golden Harvest Awards. It was the first time a Thai title won international film prizes – for Best Cinematography (by Pestonji) and Best Art Direction (by Urai Srisombat). It also received a Special AMPP Award from the Association of Motion Picture Producer of America for portraying Asian culture and increasing the understanding of Asia and the West.

Santi-Vina was credited as the first feature film shot in colour 35mm, with sound, at a time when nearly all Thai films were shot on 16mm with no direct sound. It was directed by Tawee “Marut” Na Bangchang.

Sanchai Chotirosseranee, deputy director of Film Archive, said the original material of Santi-Vina was considered lost. But from documents, he believed copies should survive in Russia and China, where the film was also shown. Another lead pointed to the UK, where the negative was processed at Rank Film Laboratories. A search revealed a registration of the film’s sound negatives – with no picture reels – at British Film Institute in London.

After some digging around, it turned out that BFI also collected the picture negatives of Santi-Vina, though they were misplaced with an incorrect registration number and thus untraceable in the first place.

The picture and the sound were put together. But when compared with another print found in China Film Archive, the reconstructed film missed several scenes and shots. BFI went back and found the lost shots kept in a separate film can. These shots were then inserted into the restored version.

The finished film now runs at 113 minutes, with radiant colour and sound. Its composition, editing and cinematography were clearly more polished than most films from the same period.

Cannes Film Festival runs from May 11-22. Several Thai films have been selected into this prestigious festival before, and in 2010 Apichatpong Weerasethakul’s Uncle Boonmee Who Can Recall His Past Lives won the top prize, the Palme d’Or. No Thai film, however, was ever invited to Cannes Classics, a respected showcase of cinematic treasure.