Drink-drivers to face work in mortuaries

The Probation Department will press its plan to ask the courts to sentence convicted drink-drivers to "volunteer" to work 48 hours in a mortuary. (Bangkok Post file photo)

The Department of Probation confirmed its plan Wednesday to have people convicted of drink-driving work for at least 48 hours in a hospital mortuary to raise awareness about the potentially deadly results of driving under the influence.

The department plans to meet hospitals regarding the new probation measure, which was recently approved by the cabinet, said Pol Col Narach Sawetanant, director-general of the department.

The number of people convicted of drink-driving during Songkran is increasing, despite campaigns to bring it down, he said.

On the first day of the water-splashing festival Wednesday, security officials were encouraging revellers to play safely and also comply with the government's campaign to cut the use of water. 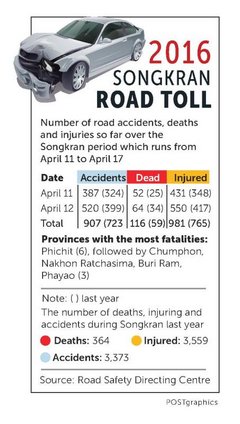 The government has been campaigning for people to use water sparingly during the festival due to the widespread drought.

On Silom Road, one of the most popular Songkran venues in Bangkok, City Hall declared a ban on the sale of large water guns which could hurt people with their high-pressure spurting.