A total of 442 people were killed in road accidents across the country during the "seven dangerous days" of Songkran which ended on Sunday, up a huge 21.4% on last year despite the government's intense road safety campaign.

There were 3,447 road crashes, from which 3,656 people were admitted to hospital for treatment of serious injuries, from April 11 to April 17, Interior Minister Anupong Paojinda, chairman of the Road Safety Directing Centre, said on Monday.

Four out of every five accidents involved motorcycles. A total of 442 people were killed, he said.

Gen Anupong said a total of 45 people were killed and 385 injured in 343 road accidents nationwide on Sunday alone, the final day of the government’s one-week campaign to promote road safety during the water festival under the slogan “Songkran Safety, Thai Culture Promotion and Traffic Discipline’’.

The figures were compiled by Road Safety Directing Centre of the Department of Disaster Prevention and Mitigation.

Chiang Mai had the most accidents over the seven days, with 168 crashes, and recorded the most serious injuries with 175 people admitted to hospital. Bangkok and Nakhon Ratchasima had the highest number of deaths at 19 each.

Just over half of the road casualties (52.8%) were working-age people, according to the Road Safety Directing Centre. Most accidents occurred on main roads (64.49%), and the peak time for crashes was between 4pm and 8pm.

Gen Anupong said he had ordered provincial authorities to study and analyse road accident statistics from this year’s Songkran festival for use in drawing up short- and long-term measures to reduce risk factors that increase the risk of accidents, including drink-driving and speeding. There might need to be amendments to the law and strict enforcement.

Transport agencies have been asked to upgrade high-risk areas on roads to reduce the likelihood of accidents, he said.

Chatchai Promlert, director-general of the Department of Disaster Prevention and Mitigation, confirmed drink-driving and speeding were major causes of road crashes during the Songkran festival. More than half of the fatalities died at the scene of the accident. 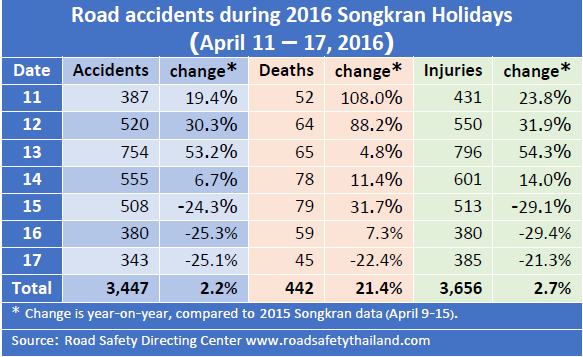 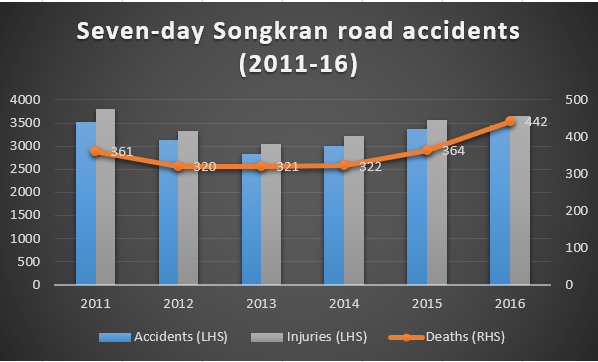