One man dies, 9 hurt in crashes

One person was killed and nine others injured in two separate train accidents yesterday in Surat Thai and Surin, police said. 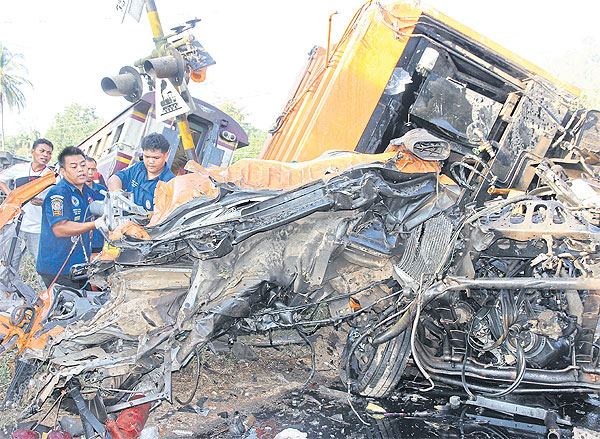 Rescue workers examine the wreckage of a garbage truck with a derailed train in the background after a fatal crash at a railway crossing in Surat Thani’s Phunphin district yesterday morning. The truck driver was killed and eight others on board the train including the driver were injured. Supapong Chaolan

In Surat Thani, a garbage truck crashed into a train at a railway crossing in Phunphin district yesterday morning, killing the lorry driver, and derailing the train. Eight people on board the train were injured.

The collision took place about 6.30am in tambon Khao Hua Khwai, about 300 metres from Khao Hua Khwai railway station. The garbage truck crashed through a wooden barrier and slammed into the tail section of train No 447.

The train, heading from Surat Thani to Narathiwat's Sungai Kolok, comprised six carriages and had about 40 passengers on board. The truck hit the 5th and 6th cars, severely damaging them and derailed the entire train.

Pongpol Sae Lim, 44, the driver of the garbage truck, was killed. Seven train passengers, including a two-year-old child, were slightly injured and admitted to Phunphin Hospital.

Meanwhile, in Surin, a pickup truck driver was seriously injured when his vehicle was hit by a train at a railway crossing in Muang district yesterday morning.

The crash occurred about 9.30am when the pickup truck, loaded with chickens, was crossing the railway tracks at Ban Khok Mian, where automatic barriers were being installed. The truck was hit by train No 421 from Nakhon Ratchasima en route to Ubon Ratchathani.

Chaowit Karaket, 35, the pickup driver, was thrown from his vehicle by the impact. He was rushed to Surin Hospital.

The crash sheared off the front section of the pickup and dozens of chickens were killed, police said.