A passenger van is engulfed in flames following a fatal crash involving the van, a pickup truck and a motorcycle in Nakhon Si Thammarat's Tha Sala district on Wednesday evening, which killed four van passengers and injured seven others. (Photo by Nujaree Rakrun)

NAKHON SI THAMMARAT - Four passengers were killed and seven other people injured when the passenger van they were travelling in hit a pickup truck and motorcycle, then a pole, and burst into flames in Tha Sala district on Wednesday evening.

The passenger van, with a Surat Thani licence plate, was travelling at speed from downtown Nakhon Si Thammarat to Surat Thani province. The driver lost control, ran into the rear of a pickup truck and hit a motorcycle before hitting a power pole lying alongside the road awaiting installation. The van overturned, then burst into flames.

Police and rescue workers who rushed to the scene found the van still engulfed in flames. Fire crews took an hour to extinguish the blaze. Local media in Nakhon Si Thammmarat reported that the motorcycle was also found burning on the road, while the pickup was pushed into a tree on the road divider by the collision.

Four passengers, one woman and three men, were found dead in the fire gutted van, trapped in the wreckage. One of the dead men was a monk, police said.

Seven other passengers were thrown from the van during the crash and suffered severe injuries. All were rushed to Tha Sala Hospital. One of them was later transferred to Maharat Nakhon Si Thammarat Hospital in a critical condition. No names were released.

Police said the van was travelling at high speed when the driver lost control, on a section of the road where accidents frequently occur. Police were investigating. 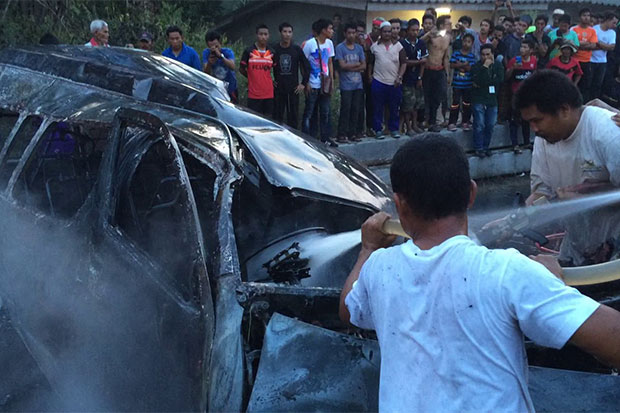 Firemen spray water into the fire-gutted van where four passengers were trapped and burned to death following a crash in Nakhon Si Thammarat's Tha Sala district on Wednesday evening. (Photo by Nujaree Raekrun)