A summer storm uproots a power pole and causes a large billboard to collapse at Seechum intersection in Muang district of Lampang, blocking traffic in the area. (Photo by Aswin Wongnorkaew)

Seasonal thunderstorms and hail continued to batter the North and Northeast over the past 24 hours, with blustery winds toppling more than 30 utility poles and damaging numerous houses in hard-hit Bung Kan province.

Shops, banks, petrol stations and 7-Eleven outlets in Muang district closed on Friday after a storm pounded several areas downtown and in nearby districts at about 2.30am today.

Storms also damaged houses and temples in Pak Khat, Seka, Phon Charoen and So Phisai districts. No casualties were reported.

In Sangkha district alone, more than 100 houses and rice barns were left without roofs. Thep-udom Witthaya School in tambon Tom also saw its roof ripped away. One two-storey wooden house in the same community was reduced to a pile of rubble.

Homeowner Pha Sricharoen, 66, narrowly escaped injury and said he took refuge in a nearby rice shed. 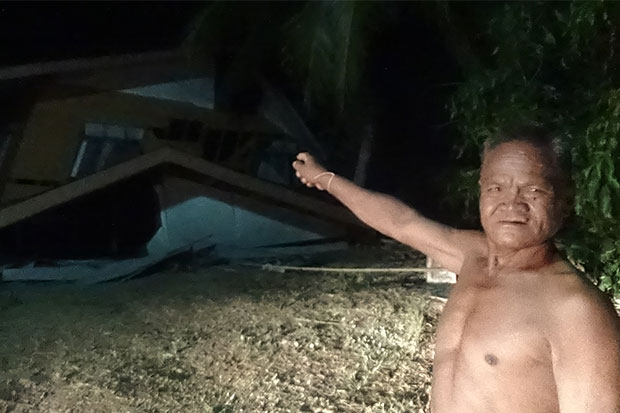 Pha Sricharoen, 66, a resident in Surin's Sangkha district, points at his two-storey house, which collapsed after it was hit by a seasonal storm on Thursday night. (Photo by Nopparat Kingkaew)

Nearby resident Ruen Nondee, 50, said she had never seen such a tempest before. She ran for her own life when the roof of her house was torn away amid a hailstone-peppered downpour.

Governor Smart Loyfa on Friday inspected Lampang airport where the roof collapsed into an airport lounge.

However, service was not seriously affected as the damage was restricted to the lounge. Flights operated by Nok Air and Bangkok Airways were delayed for four hours on Thursday night due to poor weather.

Mr Samart estimated that more than 800 homes in Muang, Mae Tha, Hat Chat and Ko Kha districts were damaged by the seasonal storms, It was the worst natural disaster to hit the province, added the governor.

Storms and strong winds also blew away a spire at an century-old temple in Lampang's Muang district. 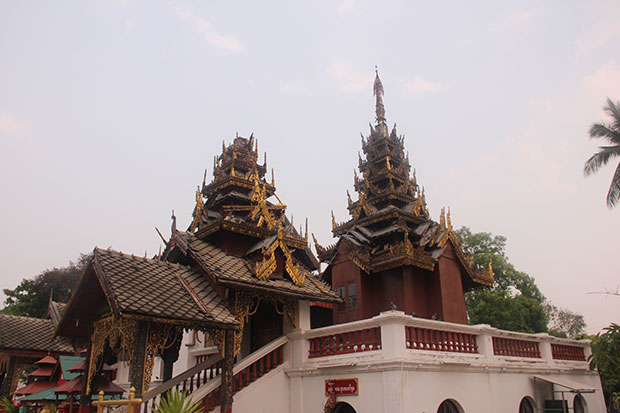 A spire on top of a hall at historic Wat Srichum in Muang district of Lampang was blown away by a storm Thursday. (Photo by Aswin Wongnorkaew)

Phrakru Suttachayaporn, abbot of Wat Srichum, said on Friday he had reported the damage to the Fine Arts Department. The temple, built some 126 years ago, was registered as a national historic site. It houses Lord Buddha relics.

In Phayao, rain and hail hit four districts on Thursday night, causing damage to many houses and fruit orchards.

Korn Manawongnan, chief of the provincial disaster prevention and mitigation office, said officials were sent to survey damage in 12 tambons. The exact number of damaged homes was being calculated, he said.

Deputy governor Niphon Sathatsamitpong said on Friday that storms have affected 1,837 people living in 112 villages in the 14 districts. 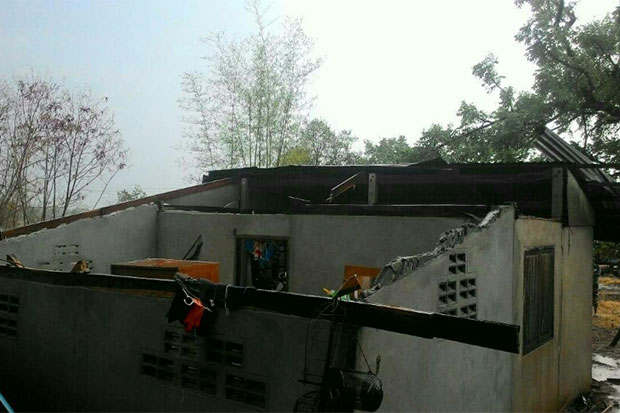 A house in Chaiyaphum province is left with no roof as a seasonal thunderstorm and hail hit the province. (Photo by Makkawan Wannakul) 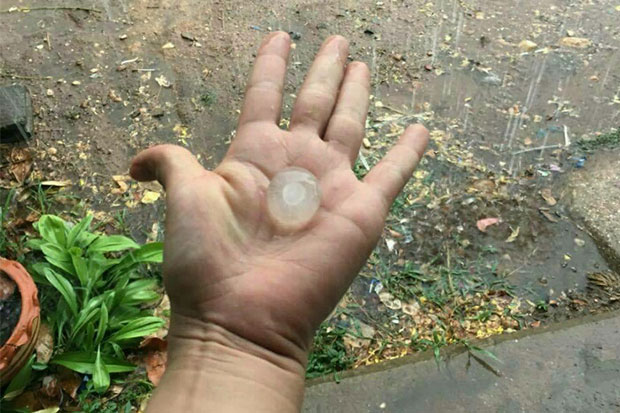 A Chaiyaphum resident shows a hailstone. (Photo by Makkawan Wannakul)