Somyot's lengthy detention takes a toll on his family

The former editor has been behind bars for five years

There is little Somyot Prueksakasemsuk's family can do except keep their wits about them and try to be optimistic as the former labour unionist-cum-red shirt activist notches up five years behind bars on a lese majeste conviction. 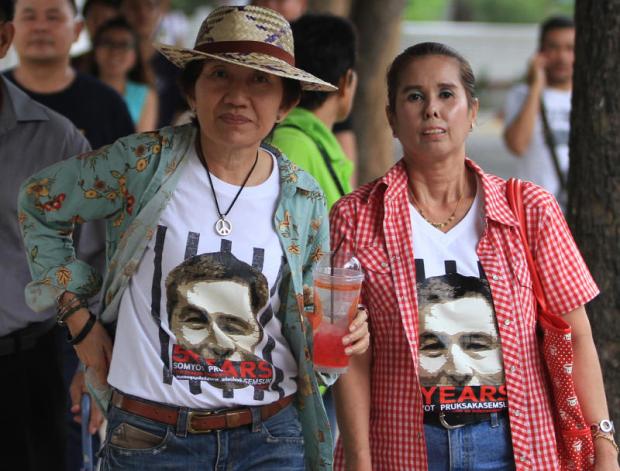 Somyot, who filed an appeal with the Supreme court 18 months ago to have the conviction overturned, has the dubious honour of being the longest detained lese majeste prisoner.

"We have to think about how we can live our lives without hurting ourselves too much psychologically, emotionally and intellectually," said Somyot's wife Sukunya Prueksakasemsuk as she waited outside Bangkok Remand Prison to see her husband on this anniversary.

Ms Sukunya, 50, said she does not have angry thoughts about her husband's prosecutors. She realised after her husband's initial bail requests were denied that he would be detained for some time.

In total, the family has requested bail 15 times since Somyot was arrested at the Thai-Cambodian border on April 30, 2011.

"He's not everything in my life. I still have a good job and subordinates to tend to. I still take care of the two children, so I try not to be too obsessed with his imprisonment," said Ms Sukunya.

Her first son, who is now a practitioner at a law firm, also visited his 54-year-old father yesterday, but her daughter, a fourth-year university student, had a stomach ache and did not go. Ms Sukunya said she struggles to understand how married life between the couple could be repaired after five years apart.

"The situation for ex-lese majeste prisoners and their families is never rosy or easy.

"Some couples split, some just can't stay together ... after release, some have difficulties in feeding their family. They can't live a normal life."

She believes pro-democracy activists will have to think more carefully about their actions in future and prepare for tough and prolonged political turbulence amid signs of greater repression. That is not just in relation to lese majeste offences but also with sedition offences under Section 116 of the Criminal Code.

Somyot, meanwhile, says he has enrolled in a political science course at Sukhothai Thammathirat Open University while he languishes in prison.

"The final verdict will have to be issued one day over the next six years," he said in a telephone interview.

"We stand by the [Working Group on Arbitrary Detention] call for Thai authorities to release Somyot and award him compensation," the statement said.

A former labour rights activist and magazine editor, Somyot was arrested five days after he launched a campaign to collect 10,000 signatures for a parliamentary review of Section 112.

On Jan 23, 2013, the Criminal Court sentenced him to 10 years in prison on two counts of lese majeste. Somyot was convicted for allowing the publication of two satirical articles in the now-defunct magazine Voice of Taksin, of which he was the editor. The articles were authored by someone else and deemed by the Thai authorities to have insulted the King.

On Sept 19, 2014, the Court of Appeal upheld the lese majeste conviction. Two months later, Somyot filed an appeal to the Supreme Court against his conviction, and all he can do in the interim is wait, while his family continues life as normally as possible outside the prison walls.