The nation and world were shocked by the brutal assault of a visiting British family punched to the ground by four allegedly drunken thugs on Songkran Day in Hua Hin. (Hua Hin Municipality video grab)

The elderly British couple whose family suffered a brutal attack by four Thai men will on Monday testify before the Hua Hin Provincial Court.

Though still haunted by the assaults which left them and their son lying bloodied and unconscious on a street in a Hua Hin resort district, Lewis Owen, 68, and his wife Rosemary, 65, managed to smile when they were visited yesterday by Orasa Awutkhom, chief of the Prachuap Khiri Khan tourism office.

They were preparing to testify before the court after the couple earlier gave police accounts of what happened in the early hours of the first day of the Songkran festival on April 13.

The four suspects face jail terms of between six months and 10 years if they are found guilty on charges of physical assault causing severe injuries. 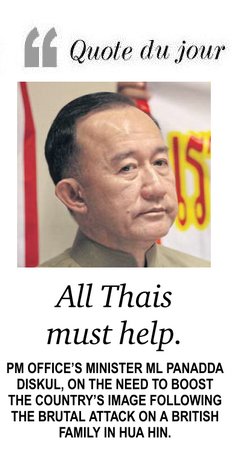 The attack started when the couple's 43-year-old son, Lewis John Owen, accidentally bumped into Suphattha Baithong, one of the suspects, in Soi Bintabhat in Prachuap Khiri Khan's Hua Hin district, an investigation found.

The Owens have blurred memories of what happened after the initial contact.

As his parents tried to stop the scuffle, Mr Suphattha and his three friends punched the three in the face, kicked their bodies and stomped on their faces.

A video clip of the attack, which went viral online and made headlines overseas, was later seen by the victims after they recovered from their head and brain injuries.

Police are searching for whoever leaked the footage of the attack and plan to charge them for dealing another blow to the country's already battered tourism image.

The video shows Thais dealing out to foreigners shocking and cruel attacks which "have left a huge impact on the victims' minds", Ms Orasa said.

Prachuap Khiri Khan governor Thawi Naritsirikun has set up a committee to improve safety for Thai and foreign tourists.

Vigilance will be tightened in Hua Hin district and Pak Nam Pran in Pranburi district, which are well known for their beaches, he said.