Flames engulf a loaded fuel tanker and a container truck's trailer after a collision on Highway 304 in Phanom Sarakham district, Chachoengsao, on Friday morning.(Photo by Sonthanaporn Inchan)

CHACHOENGSAO – A loaded fuel tanker hit a container truck on a highway in Phanom Sarakham district early on Friday morning, then exploded into flames that quickly engulfed both vehicles. The two drivers escaped unhurt.

The accident was reported around 5.40am to Khao Hin Son police. Rescue teams rushed to the accident scene on the outbound lane of Highway 304 linking Kabin Buri and Nakhon Ratchasima.

The 10-wheel fuel tanker,  with about 15,000 litres of gasohol, ran into the right rear end of the truck, which was carrying large steel pipes. When police arrived both vehicles were on fire.

Banluesak Limpisawat, 54, said he was driving along the road near Khao Hin Son community when the fuel tanker violently collided with him from behind.

The tanker began to burn. He tried to drive away, hoping to separate the two vehicles and avoid the flames, but he was unable to do so.

So he released the trailer and its container from the front tractor and was able to drive the cabin safely away. Fire fighters took about an hour to control the flames.

Tanker driver Thevada Wichienwat, 42, said he was delivering about 15,000 litres of gasohol 91 and gasohol 95 from Chon Buri to Prachin Buri.

Although there were no injuries, the accident and fire blocked traffic for more than three hours, causing a long traffic jam. 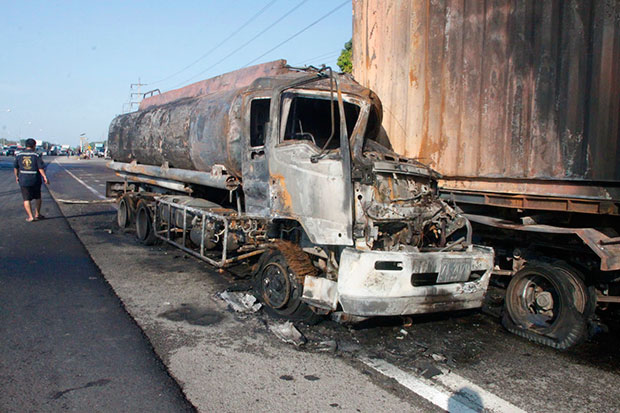