Thong Lor police say they will arrest Vorayudh "Boss" Yoovidhaya if he fails to answer charges in connection with the 2012 hit-and-run death of a policeman.

The Red Bull heir will have until May 25 to report to prosecutors or face arrest, though police admit that authorities are unclear of his whereabouts.

Interrogation chief Sarawut Detsri confirmed on Saturday that Thong Lor station had received a letter from the Office of the Attorney-General to order Mr Vorayudh to meet prosecutors. Police followed up the order by applying for the summons. 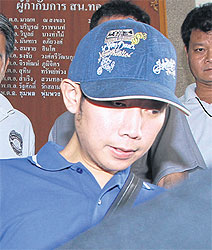 Pol Col Sarawut warned the suspect that an arrest warrant would follow unless he met the officers by the deadline. Police have not been in contact with him and are uncertain whether he is still in the country, he added.

On social media, a number of people criticised police working on this case.

"Authorities do not know where he is. But they're very good at finding members of the opposition (and their mamas)," David Nicolson Freidberg wrote.

"This is a real test for the Thai justice system," wrote Ting Thountula Thavixay.

The youngest son of Red Bull executive Chalerm Yoovidhaya and grandson of the late founder Chaleo Yoovidhaya, Mr Vorayudh is accused of slamming his speeding black Ferrari into the motorcycle of Pol Sgt Maj Wichian Klanprasert of Thong Lor station on Sukhumvit Road in the early morning of Sept 3, 2012.

Shortly after the crash, a Thong Lor police officer attempted to detain the Yoovidhya family driver, ostensibly to take the blame for a crime he had not committed. The officer was transferred to an inactive post.

Mr Vorayudh was initially charged with reckless driving causing death, failing to help a crash victim and speeding. The speeding charge expired after one year amid criticism of poor police handling of the case.