Authorities charge a "well-organised syndicate" of spies and cheats caused cancellation and forced a retest of entrance exams at Rangsit University's main medical faculties. Three proxies and three students were caught with hi-tech glasses and smart watches (above) which secretly filmed the exam papers and supplied the answers. RSU is pressing charges and will re-run the exams for all applicants on May 31 and June 1. (Photos via FB/Arthit Ourairat)

Rangsit University on Sunday cancelled the entrance exams to its College of Medicine and two other faculties after three students were found to have used hi-tech devices provided by a gang to cheat.

In an announcement on its website, RSU told more than 3,000 students who sat exams to the College of Medicine and the faculties of Dental Medicine and Pharmacy, held on Saturday and Sunday, to appear for a re-test on May 31 and June 1 without charge. It cited “cheating carried out by a well-organised syndicate and the use of electronic devices” in the May 7-8 tests as the reason for the cancellation.

Nares Pantaratorn, vice president of RSU’s Academic Affairs, told the Bangkok Post that each of the three cheaters wore a “smart watch” provided by a private tutoring institute located near the campus to receive answers from the gang.

The gang sent three proxies, who each wore a pair of glasses with a hidden video camera, to sit the exam. They used the spy glasses to film the questions and then immediately left the room after 45 minutes, the minimum time requirement for applicants to finish up and exit the test venue.

The proxies then downloaded the video footage to their laptops and emailed it to the tutoring institute, where a team prepared answers which were then sent to the three students who were wearing smart watches. (Story continues after photo) 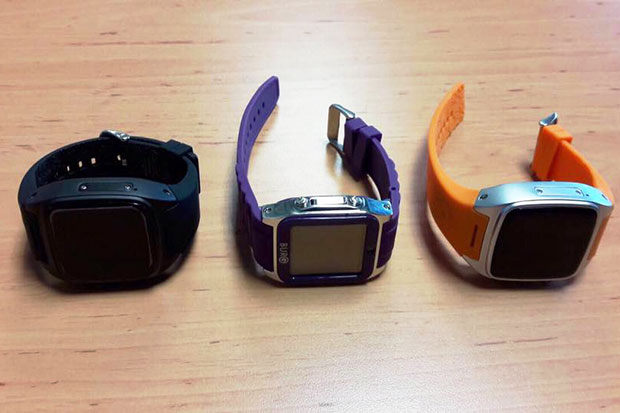 Three “smart watches” seized from the students who each would have paid 850,000 baht to the gang if the cheating was successful. (Photo from Facebook of Arthit Ourairat)

Arthit Ourairat, rector of Rangsit University, on Sunday posted photos of the devices used in the cheating on his Facebook account. The photos have been shared widely on the Thai social media as it is believed this cheating method involving smart watches and glasses with video cameras has never been exposed before.

The scam was exposed after university staff became suspicious when the three proxies left the exam room at the same time immediately after the 45-minute requirement.

The names of the individuals and the private institute have not been disclosed.

Mr Nares said the three had confessed to being paid 6,000 baht each for the job and the university had filed a charge against them with police. He said only one of the three cheating students had admitted to the crime.

According to the student, he gave 50,000 baht as a deposit to the gang and was given a smart watch. He was required to pay another 800,000 baht if the gang successfully helped him to pass the exam.

The student said he approached the institute after reading its advertisement which guaranteed a 100% pass in the entrance exams to RSU medicine-related faculties.

“Now we are trying to persuade the other two kids who have yet to confess to give us information so that we can take [legal] action against that tutoring academy to the fullest extent,” Mr Nares said.

“This is an unacceptable act in academic circles. We will take both civil and criminal action because there were many students who had paid a great deal of money to attend the May 7-8 exams," he said, adding the university might in future only allow students being tested to take pencils into the exam room, while glasses will be carefully checked.