Phra Dhammajayo 'too ill to travel'

The controversial abbot of Wat Phra Dhammakaya will once again skip a meeting with investigators on Monday, as the temple claims he is suffering from "potentially fatal" ailments and cannot travel. 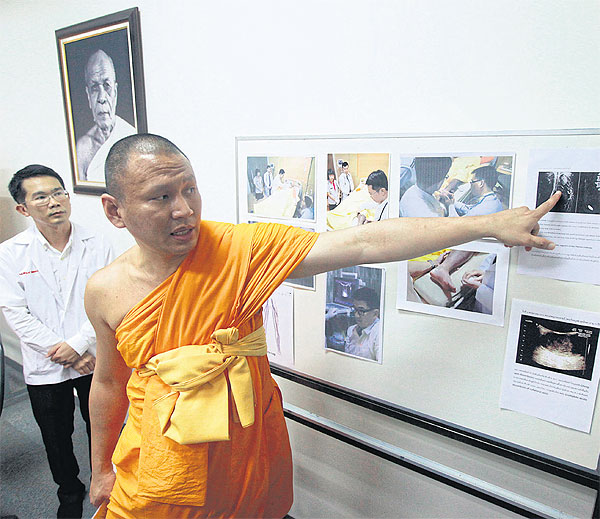 Pointing out the problem: A monk representing Wat Dhammakaya in Pathum Thani points to an X-ray. The monk says Phra Dhammajayo is too ill to travel.

Phra Dhammajayo instead wants Department of Special Investigation officers to meet him at the temple, an invitation the DSI has so far not responded to.

The DSI issued another summons for him to meet investigators tomorrow, warning that he would face an arrest warrant if he failed to report.

The abbot is accused of involvement in money laundering and receiving stolen property worth 1.2 billion baht in connection with the 12 billion baht Klongchan Credit Union Cooperative embezzlement case.

During a media briefing yesterday, Phra Sanitwongse Wuttiwangso, director of Wat Phra Dhammakaya's communications office, said Phra Dhammajayo has been suffering from deep vein thrombosis and is receiving medical treatment at the temple in Pathum Thani.

A team of doctors who said they were caring for the abbot was also present during the briefing.

"Phra Dhammajayo is still resting under treatment at the temple. He has not fled," Phra Sanitwongse said.

"But doctors advised the abbot not to move around too much, otherwise blood clots could be carried into his blood vessels and clog an artery or vein, which could be fatal."

The temple had asked DSI authorities to travel to the temple tomorrow, the monk said, adding that Phra Dhammajayo has been suffering from the condition for more than a decade.

The monk did not say whether DSI authorities would be allowed to meet with Phra Dhammajayo directly.

Asked why the abbot has not been sent for treatment at a hospital, Capt Atchariya Pangma, a doctor specialising in emergency medicine, said Phra Dhammajayo did not want to "cause trouble" to hospitals. He believed many of the abbot's followers would visit him and cause inconvenience to other patients.

Pictures previously released to the media showing Phra Dhammajayo receiving treatment had notably failed to show the abbot's face. Phra Sanitwongse claimed the abbot did not want his followers to see his face while he was ill.

"Phra Dhammajayo does not want anyone to see pictures of him while he is ill. He only wants everyone to see him in a sitting mediation posture," Phra Sanitwongse said.

The DSI released a video clip late last month which appeared to show the abbot in good health and walking freely among his supporters at the temple.

Dhanakom Premprabha, a doctor specialising in vascular and endovascular surgery, said Phra Dhammajayo has been diagnosed with deep vein thrombosis in the left leg.

The leg is swollen and the abbot was suffering from periodic fatigue, the doctor said.

He said the abbot had been advised not to sit with his legs dangling and to sleep with his legs raised to a level higher than his chest to stimulate blood flow to his heart.

Phra Sanitwongse also denied the temple's plan to hold gatherings of temple followers from today until Friday are designed to oppose the DSI's legal action against the abbot. The gatherings are held to mark Visakha Bucha Day on Friday, the monk said.

DSI director-general Paisit Wongmuang said a team of lawyers representing Phra Dhammajayo had written to the DSI to ask for a change of venue for the abbot to acknowledge the charges against him.

Documents issued by the doctors confirming the abbot's illness were also sent as evidence.

Pol Col Paisit said he had instructed Pol Lt Col Pakorn Sucheevakun, director of the DSI's Bureau of Financial and Banking Crime, to meet with prosecutors to consider whether to approve the temple's request.

Justice Minister Paiboon Koomchaya yesterday said he had not given the DSI any instructions on how to proceed.