Purple Line commuters to get the blues
Thailand
General

Purple Line commuters to get the blues

In the next few months, people in Nonthaburi will be able to ride an electric train to Bangkok. But the bad news is their journey on the Purple Line will end at Tao Poon station, a kilometre away from the starting point of the Blue Line service which runs through the inner circle of the capital, such as Asok and Silom.

Questions have been raised as to why there was no connection between the two lines in the first place.

The Purple line, which will open on Aug 6, runs from Bang Yai district of Nonthaburi to Tao Poon in Bangkok through 16 stations with a total distance of 23 kilometres. According to the plan, the line will be extended from Tao Poon to the southern part of the capital, passing through Dao Khanong and Rat Burana, stretching more than 20km.

Commuters will be charged from 14-42 baht when travelling along the Purple line. In the first year of the launch, 120,000 commuters are expected to use the line every day. The number is projected to jump to 400,000.

When the line is launched in August, Purple Line passengers will find it inconvenient to travel to inner areas of Bangkok as there is no connection between the line and the Blue Line, which extends to inner areas. 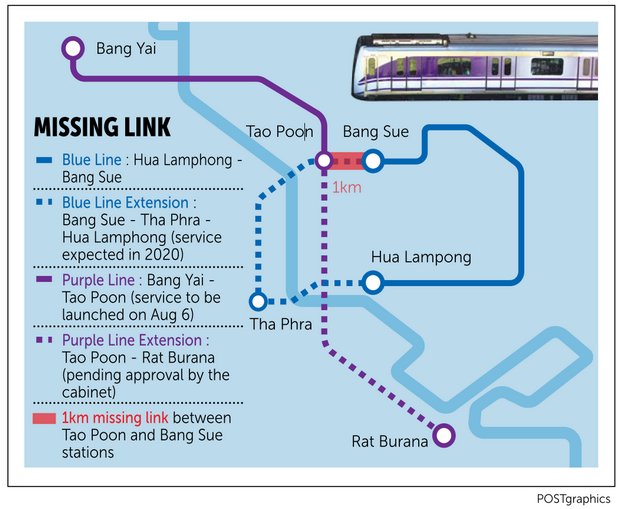 The government has promised to provide shuttle buses to carry passengers between the Purple Line's Tao Poon station and the Blue Line's Bang Sue terminal.

Political influence is said to be behind this mishap.

Pakapong Sirikantaramas, deputy governor of the Mass Rapid Transit Authority of Thailand (MRTA), said the Bang Yai-Tao Poon section was originally planned to be the extension from the Blue Line which runs like a circle around Bangkok.

Under the Blue Line, the first section of 20km from Hua Lamphong to Bang Sue has been in service since 2004. Construction is under way for another two sections (Hua Lamphong-Tha Phra-Bang Khae and Bang Sue-Charan Sanitwong-Tha Phra). They are expected to be launched in 2020.

The Bang Yai-Tao Poon section was split from the Blue Line and formed to become the Purple Line under Thaksin Shinawatra's government in 2004, when the master plan of Bangkok's mass public system was overhauled, Mr Pakapong said.

The administration wanted the Purple Line to bring economic development to suburban Bangkok along the line so efforts were geared up to complete construction of the line before its original plan, he said.

The Purple and Blue lines have been developed separately, he said.

The disconnection occurred because the construction of Blue Line's Bang Sue-Tha Phra section, which covers the missing link between Bang Sue and Tao Poon, is still under way, he said.

In the future, the Purple and Blue lines will be linked at Tao Poon station. The Blue Line will run through the first level at the station, while the Purple one will go through the second level, he said. 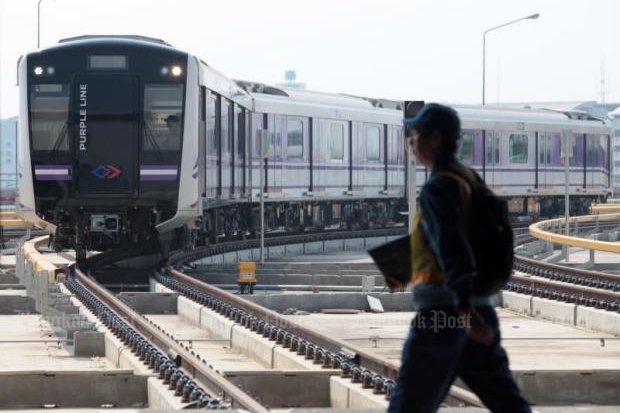 The Purple Line begins test runs next month and is due to open in August. But it's a line with no direct links to any other. (Bangkok Post file photo)

For years, the MRTA had been trying to solve the missing link from Tao Poon to Bang Sue so passengers can transfer between Purple and Blue lines at Tao Poon station.

Mr Pakapong said two options had been raised. One was to incorporate this missing line into the Purple Line and hire any firm to run the service.

It could also be Bangkok Expressway and Metro Plc (BEM) which has already operated the Blue Line's Bang Sue-Hua Lamphong section.

He said this option was shot down as the investment was not seen as viable.

The operator had to acquire the operation system and trains to provide the service only for one station.

Another choice, he said, was to grant a single operator to run the service for the extension of the Blue Line, totalling 28 stations, including the missing link.

On May 3, the cabinet agreed with the second choice but there was still no conclusion as to whether it would hire BEM to operate it, he said.

The decision will rest with the Public-Private Partnership Committee, he said.

MRTA board chairman Yodyuth Boonyatikarn said if BEM is allowed to run the service on the Blue Line extension, including the missing link, the company could start operating the missing section within a year.

If a new bid for the operator is called, the process could drag on and it may take as many as three years before the service is launched.

The committee is expected to reply within two months, Gen Yodyuth said.