The National Council for Peace and Order has bypassed the screening process by appointing Chaiya Siriamphunkul of the Royal Thai Police Office the new chief of the Anti-Money Laundering Office.

The NCPO cited the need to exercise Section 44 for the appoinment to facilitate the "urgent tasks" carried out by the agency, while the selection process was "time-consuming", according to the Royal Gazette on Tuesday. 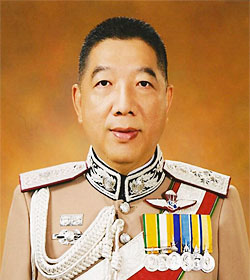 It ordered Pol Gen Chaiya to work as acting Amlo secretary-general until his position becomes official after he is approved by the National Legislative Assembly and royally endorsed.

Pol Gen Chaiya is a senior inspector-general at police headquarters. He succeeds Seehanart Prayoonrat at the head of the agency.

Pol Gen Sihanart was moved to the positionof Amlo advisor on March 13 after he completed his term at the office. He remained acting chief while the agency was waiting for a new secretary-general.