Thon Buri-Nam Tok train No 257 stops on the River Kwai Bridge after hitting a 52-year-old Japanese businessman taking a selfie on Saturday morning. Haruhisa Saito is being treated in hospital for broken ribs and head injures. (Photo by Piyarach Chongcharoen)

KANCHANABURI — A Japanese man taking a "selfie" on the famous River Kwai Bridge was seriously injured after being hit by a train in full view of hundreds of shocked tourists on Saturday morning.

Haruhisa Saito, 52, sustained broken ribs and head injuries after being struck by Thon Buri-Nam Tok train No 257 on the bridge in Muang district, said Pol Lt Wichai Srimuangthanachai, a deputy tourist police inspector in Kanchanaburi province. The incident was reported at 11.25am on Saturday.

Police rushed to the scene and found the train stopped on the track. The injured man had already been sent to a nearby hospital.

Police said that Mr Saito, the president of Silvec Co in Chon Buri, had taken his employees to visit Kanchanaburi for the holiday weekend. The businessman was walking along the bridge, part of the infamous World War II Death Railway, and stopped to take some photos.

While he was taking a selfie, he did not notice the train coming behind him. The train kept whistling, but he failed to hear it. When the train struck him, the impact threw him from the bridge to the ground about five metres below. Around 1,000 Thai and foreign tourists were visiting the area and many screamed in panic.

Rescue workers provided first aid and rushed him to the hospital. 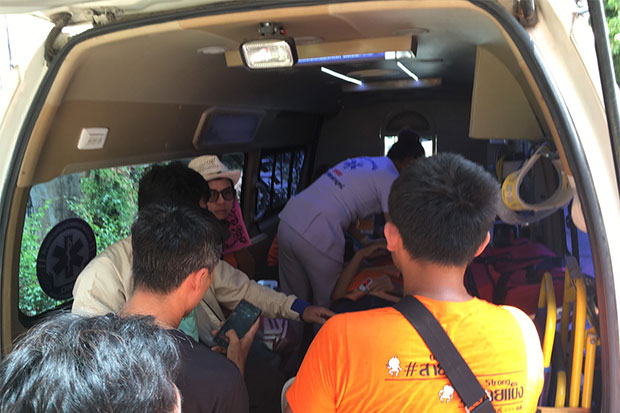 A 52-year-old Japanese businessman injured after being hit by a train is treated in an ambulance before being taken to hospital. (Photo by Piyarach Chongcharoen)