A Japanese man was critically injured when he was hit by a train and fell five metres from the bridge on the River Kwai in Kanchanaburi on Saturday. 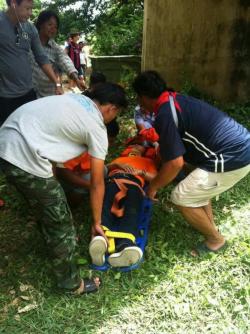 HELP ARRIVES: A Japanese man fell after being struck by a train in Kanchanaburi.

Haruhisa Saito, 52, is being treated in a local hospital for broken ribs and head injuries.

Mr Saito, chairman of the Chon Buri-based Thai Silvec, an anodising and plating company, had taken the company's employees on an excursion to the River Kwai in Kanchanaburi for the long weekend.

During a tour of the Death Railway he stopped at an elevated section of the track to take a photograph, oblivious to the train approaching from behind. The train blared its horn to alert Mr Saito but it knocked him off the track. He fell five metres to the ground below.

The incident was witnessed by hundreds of tourists.