The father of an 8-year-old girl who was raped and subsequently died is loaded in an ambulance for transport to Trang Hospital after being found hanging by a cord around his neck in a police cell on Tuesday morning. The 33-year-old man admitted sexually abusing her while high on drugs, police say. (Photo by Methee Muangkaew)

TRANG - The father of an 8-year-old girl who was raped and subsequently died had admitted having abused her while high on drugs, before he attempted to take his own life in a police cell on Tuesday morning, police said.

The man, 33, was being held in the Muang police station cells after being detained on suspicion of involvement in the crime.

He claimed he took illicit drugs on the night he abused her. However, he did not say whether he sexually assaulted the girl alone or if other people were involved.

Police were awaiting the results of  tests on DNA samples taken from six other men. Results were expected to be known this week.

The suspect was found hanging by a cord around his neck in his cell shortly after 6am, Pol Lt Ekkalak Sakchainant, an investigating officer, said earlier on Tuesday. The man was still alive and was rushed to Trang Hospital.

The father, whose name was withheld, was arrested on a warrant issued on May 23 for alleged  involvement in the rape of a child aged under 13.

The girl, aged 8, died after being drugged and raped at her house in tambon Nong Trud of Muang district in the early hours of May 10.

Police had first arrested a 20-year-old neighbour and friend of the girl's family for alleged involvement in the drugging and raping of the child, who died in hospital.

The girl complained to her mother of an acute stomach ache and developed signs of confusion and agitation. She was admitted to Trang Hospital and told her mother what happened before she died.

Police later summonsed seven other men, including the girl’s father, for questioning. DNA samples were taken for comparison testing with other samples from the girl.

The case then took a new twist. The girl’s father became a prime suspect and was detained.

After intense interrogation the man became stressed, police said. He was then found hanging in his cell on Tuesday morning, but his reported suicide attempt failed.

A source said the suspect was in a safe condition. Doctors had intended to move him from the hospital’s intensive care unit to a general ward, but it was postponed after a crowd of people converged on the hospital. At least 30 police were deployed to the hospital to keep the crowd back and prevent any unpleasant scenes. 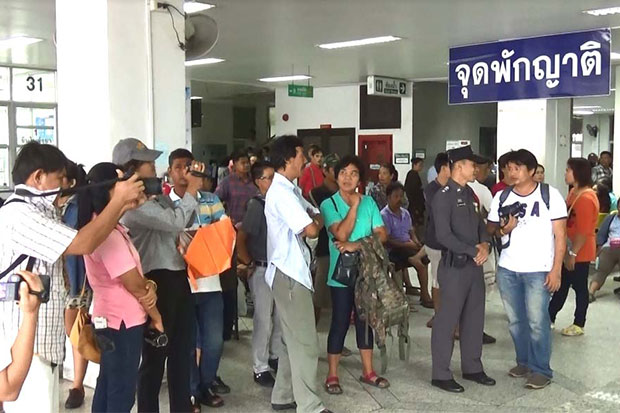 People gather in front of Trang Hospital's intensive care unit where the father of an 8-year-old rape victim was being treated after trying to hang himself in a police cell in Muang district. The 33-year-old man is a prime suspect in the child's rape and subsequent death. (Photo by Methee Muangkaew)