AYUTTHAYA - Prosecutors arraigned Janepob Veeraporn, the man behind the wheel of the speeding Mercedes-Benz that killed two post-graduate students in a fiery crash on March 13, on multiple charges in the Ayutthaya Provincial Court on Friday afternoon.

The court set May 30 for its decision on whether to accept the case for trial, and ordered Mr Janepob to be present. He faces eight counts, including recklessness causing death, and is currently free on conditional bail.

Prosecutors said  earlier in the day they also planned to ask the provincial court to impose a life-long driving ban on Mr Janepob.

The court would be asked to expressly prohibit him from taking unauthorised drugs and alcohol, and to commit him to a nursing home for the mentally disordered if for any reason the charges were commuted.

Prosecutors briefed the media on progress in the case on Friday morning.

Region 1 chief prosecutor Yongyut Kiartisaksophon said the Office of the Attorney-General is giving importance to this high-profile case as the pubic is keeping a close watch on it.

Mr Janepob’s Mercedes slammed at speed into the back of a Ford sedan carrying Thanthaphat Horsaengchai, 34, and Kritsana Thaworn, 32,  on Phahon Yothin Road in Ayutthaya's Bang Pa-in district on March 13. The sedan burst into flames and both post-graduate students were killed.

The prosecutors agreed to indict the suspect on eight counts, as proposed by the police investigators.

The charges  are:  reckless driving causing death and property damage; driving while unfit to do so; drink-driving causing death; driving without regard for safety causing death; speeding; driving under the influence of drugs; refusing a drug test; and acknowledging officials' orders but failing to comply without appropriate justification, Kritsada Rojanawan, Ayutthaya chief prosecuter, said.

Prosecutors would also ask the court ban him from driving any kind of vehicle for life, and bar him from taking illicit drugs and drinking alcohol, Mr Kritsada said.

In the event his conviction or sentence was commuted, the court was asked, in the interests of public safety, to commit him to a nursing home for treatment for mental disorder.

Relatives of the two victims could demand compensation from Mr Janepop, said Mr Kritsada. The relatives could also  be co-plaintiffs with provincial prosecutors to file the suit against the suspect. Mr Janepob also had the right to legal defence counsel.

Prayut Phetkun, deputy spokesman to the Office of the Attorney-General, said prosecutors planned to file  the indictment at the provincial court on Friday afternoon. Mr Janepob did not need to be present as he was already in court custody.

Ayutthaya police handling the case earlier came under public heavy criticism after they allowed Mr Janepob to avoid a blood-alcohol test. Investigators were accused of dragging their feet in the investigation because he comes from a wealthy family.

The provincial court earlier released him on bail on condition he report every seven days. Mr Janepob was reportedly ordained as a Buddhist monk at a Bangkok temple on May 8 to make merit for his crash victims for 15 days. 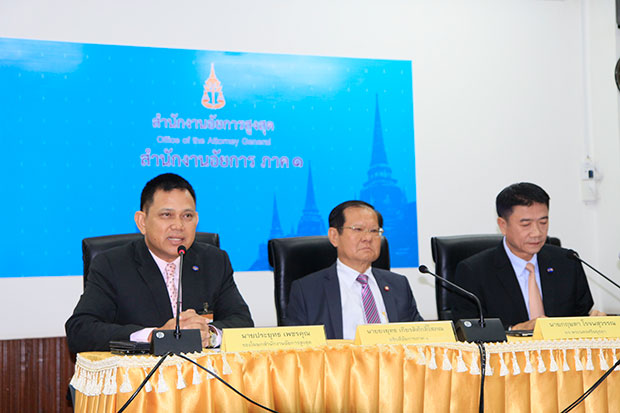 Prosecutors brief the media on Friday on progress in the case of Janepob Veeraporn, driver of the Mercedes-Benz involved in a fiery high-speed crash in March in Ayutthaya that killed two post-graduate students. (Photo by Sunthorn Pongpao)