Dhammajayo case 'to be wrapped up in 2-3 weeks'

A backhoe blocks one of one of the gates to Wat Dhammakaya, where supporters feared DSI offricers were planning to raid the premises and take away the temple's abbot. (Photo by Apichit Jinakul)

Justice Minister Paiboon Koomchaya says investigators are expected to wrap up the case against Phra Dhammajayo in two or three weeks but he won't say whether they will be able to arrest him.

He made the comment on Friday after a Department of Special Investigation (DSI) meeting agreed on five measures to pursue in hopes of bringing in the 72-year-old abbot of Wat Dhammakaya for questioning.

Investigators had given the abbot a deadline of Thursday to report for questioning in connection with the multi-billion-baht Klong Chan Credit Union embezzlement scandal. Phra Dhammajayo has acknowledged receiving money from the perpetrators but has denied knowing the money was stolen.

Officials of the temple have repeatedly said that the abbot is too ill to travel and have produced medical certificates that the DSI disputes. On Thusday he was brought to a police station but he reportedly fell ill inside the van he was travelling in and was taken back to the temple.

DSI officials resolved on Friday that sterner steps would be taken to arrest the monk. Second, arrest warrants will be given to police and administrative officials who can take him into custody on sight.

Third, the DSI chief would send a letter to the Supreme Sangha Council, as the supervising authority of all Buddhist monks, to explain the procedures and the charges against the monk.

Fourth, the law on harbouring suspects under Section 189 of the Criminal Procedure Code will be used to punish those trying to hide or prevent him from being arrested. Finally, prosecution would be sped up as soon as possible.

"All these steps will be taken under regular laws," said Gen Paibul said. "Section 44 of the 2014 interim charter [which gives the prime minister absolute power] or force will not be used. This is a policy given by the prime minister."

To arrest the monk who is supposedly staying at the mega-temple in Pathum Thani, a search warrant is needed and investigators will decide when they would ask the court for it, the general said.

Asked about the blocking of a temple entrance by Dhammajayo supporters on Friday, Gen Paibul said it underscored the intentions of certain people and the public should be able to think for themselves.

"Officials have abided by law, but the laws require steps to be taken and we must be careful," he said.

"We've treated him like other suspects but he might have some 'potential'. If we can't arrest him, we'll explain [the reasons] to the public. No one wants to see clashes and unrest."

He also asked the public to be patient.  "We have steps to follow and we won't rush it. I'd like to ask the suspect and his supporters to respect the law. What they're doing now is illegal."

Asked whether the monk could be prosecuted even if he did not come to hear the charges, the minister said it depended on the discretion of the court and prosecutors.

The issue with Phra Dhammajayo is his popularity. He and the temple had a large number of devout -- as well as wealthy and influential -- followers both inside and outside the temple and many are upset about what they see as unfair treatment of the abbot.

They believe the abbot has done nothing wrong, the DSI overstepped its authority and the entire scheme is a plot to seize the temple's massive assets.

Authorities estimated there were at least 4,000 people on the premises who are ready to protect him should the police try to force their way in. Clashes would likely result if they use force.

Earlier, there were rumours the DSI might use a helicopter or a SWAT team in the arrest but the officials denied them.

Also on Friday, Phra Dhammajayo's doctors issued a statement saying he had an attack vertigo while trying to sit on Thursday. Therefore, he could not report to the Khlong Luang police station as scheduled.

The doctors gave him an injection and he is being monitored. If he doesn't recover, they will consider sending him to a hospital.

Shortly before noon, a spokesman for Wat Dhammakaya disciples said they had not created a "human shield" inside the monastery and that everyone was there to practise dhamma normally.

Ongart Dhammnitta said the heavy machinery belonged to a disciple who was concerned the DSI would raid the premises. In any case, the temple closed some gates for safety reasons and other gates remained open.

He insisted Phra Dhammajayo was sick and still in the temple.

On Liab Khlong 3 Road close to a gate of the temple and near where the abbot is staying, someone brought graders and backhoes to block the entrance on Thursday night. Some people are also guarding the gate from both inside and outside the temple.

There has also been speculation that the abbot might not be allowed bail if he surrenders. In such a case, he would have to be defrocked. 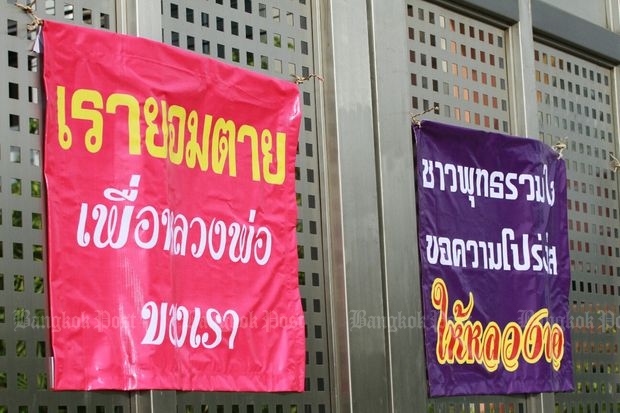 Posters are seen near Gate 5 of the temple on Friday. They read: "We're willing to die for our Luang Por" (left) and "Buddhists join hands to seek transparency for Laung Por". (Photo by Pongpat Wongyala) 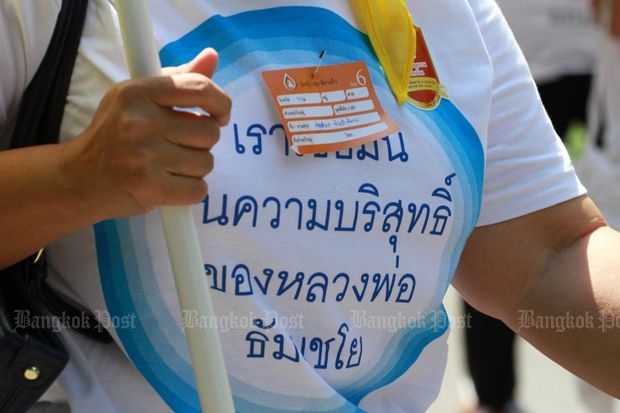 A Wat Dhammakaya supporter wears a T-shirt reading: "We have faith in the innocence of Luang Por Dhammajayo". About 1,000 disciples marched while praying for the abbot at the temple on Friday. (Photo by Pongpat Wongyala)