Fishermen give up age-old secrets

Seafarers on the Andaman and Gulf of Thailand have much to learn from each other, writes Supaporn Asadamongkoln

Muhamasukree Masaning explains the ecological features of the Pattani shoreline to visiting fisherfolk from the Andaman coast. Photos by Supaporn Asadamongkoln

Along the shores of Pattani, part of the great Gulf of Thailand, an intriguing interplay is being carried out among fishermen from other parts of the country who are trying to combine their age-old wisdom and techniques to preserve and maintain their "hunting grounds".

For the second time this year, local fishermen in Yaring district are hosting fishing folk from the other side of the slender strip of land that is southern Thailand, and passing on their lore which they hope can be useful for tapping the resources of the Andaman Sea.

About 40 members of fishing communities along the west coast of Thailand in the provinces of Ranong, Phangnga and Phuket have crossed to the Gulf coast where they set off on a four-day trip along the Gulf shore to experience first-hand the livelihoods of seaside villages along the southeastern coast, running from Nakhon Si Thammarat's Khanom district right down to Pattani.

The voyage is part of a project to reserve and rehabilitate marine and coastal resources in Thai waters launched by the Ministry of Natural Resources and Environment (MNRE).

While some people were apprehensive about going to the troubled southern provinces and cancelled their trips, it did not phase Krieng Mahasiri, director of the MNRE's coordination unit.

Among the fishing communities the group visited was the Pattani Provincial Small-Scale Fisher Network Association (PSSFA) in Yaring district. 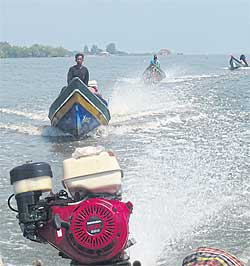 The visitors enjoy a little fun along the Pattani shore.

Mr Krieng said Pattani Bay had once been a rich source of first-rate seafood. Although most of the PSSFA members were impoverished, they were armed with an incredible wealth of knowledge on how best to tap marine resources in a sustainable way.

"We want the villagers to acquire fishery know-how from their peers who bravely want to preserve their lifestyle handed down from their ancestors, and to conserve and rehabilitate the country's marine resources," he said.

Founded in 1993, the PSSFA was established by local fishermen in Pattani after a number of villagers were forced to leave their hometown to work in Malaysia due to the rapid deterioration of marine resources caused by fishing vessels using destructive practices.

The association then turned its focus on local authorities, using pressure to force them to launch a crackdown on the trawlers.

In June, 2003, after the destructive fishing issue had been put on the back-burner for a long time, about 10,000 small-scale fishermen held a rally outside Pattani City Hall, demanding the authorities take stringent legal action against owners of large fishing boats.

At the time, the locals were also working closely with academics to collect data and study relevant laws and regulations. The information was later used as a reference for straightening out illegal fishing activities and to protect local marine resources. The PSSFA has since come to be the voice of fishermen in the province.

Mr Krieng said the PSSFA has been fighting for more than 20 years to keep the sea from being invaded by excessive commercial fishing.

During last month's trip, the Andaman coast fishermen learned of the measures the Gulf fishing villagers had adopted to improve their livelihoods and profession as well as protect natural resources, Mr Krieng said. 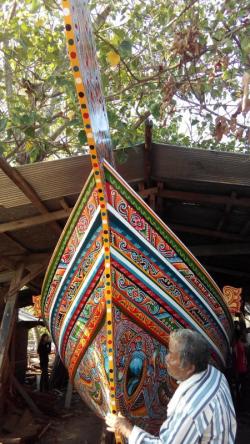 Pin Ruengkit, a fisherman from Phangnga’s Koh Yao district, checks out the fine detail on a ‘kohlae’, the traditional fishing boat of Pattani.

The exchange of knowledge and interaction between the fishermen from the two coasts took place at the PSSFA's Pattani local fishery school where an amazing array of fishing practices and traditions and culture was being promoted, from the craft of assembling the kohlae -- a traditional brightly-painted fishing boat used ubiquitously on the southern east coast -- to hand-strung fishing gear such as trawls and traps.

The gear differs in shape and size, tailored for hunting the various types of aquatic animals in different underwater terrain.

Knowledge is also discussed on how to check weather patterns before the fishermen venture out to sea, as well as to how grow sea grass, a marine plant which acts as a natural habitat and nursery for many water creatures to breed and spawn.

The PSSFA members believe in passing on their extensive folk wisdom to others to conserve marine resources and their livelihoods, Mr Krieng said.

PSSFA chair Muhamasukree Masaning said the association currently has more than 80,000 members in 52 villages across six districts of Pattani. The members fall into three groups.

The first are fishing folk who don't operate from boats but specialise in catching marine animals with their bare hands. The second group of members own fishing vessels which are not equipped with engines and mostly operate along the shallow water near mangrove forests and the shoreline. The third group includes villagers who have motorised fishing boats of between five and 12 metres in length with engines not exceeding 150 horsepower.

Mr Muhamasukree said most of fishermen in the province are in the third group. Their vessels are installed with fishing gear in line with the law, which allows them to go further from shore and catch larger aquatic animals.

At a shipyard in Ban Patabudee, which is part of the Pattani local fishery school, Pin Ruengkit, a middle-aged fisherman from Phangnga's Koh Yao district, is looking closely at a kohlae being assembled. He grunted his fascination at the distinctive appearance of the fancy-coloured boat.

Where he comes from, fishing boats look quite different and have a taller bow, called rua hua tong, suitable for cutting through the high, rolling waves of the Andaman. 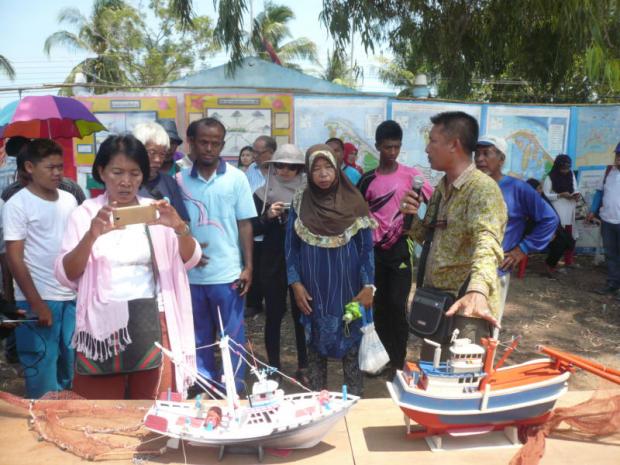 Mr Muhamasukree briefs visitors on fishing vessels commonly found in the lower southern section of the Gulf of Thailand.

Even though the kohlae is not built for the Andaman's tough conditions, Mr Pin said the knowledge in building it and the hua tong boats being shared at the school could inspire new ideas that might improve vessels indigenous to fisher folk from the two coasts.

Mr Muhamasukree said despite being small, the Ban Patabudee dockyard is renowned for constructing top-quality boats that are meticulously painted with the typical kohlae pattern. A year-long wait for a commissioned boat is not uncommon.

The iron wood (ta khien) is carefully selected to make the kohlae boats. After several months of painstaking assembly, the vessel is delivered to a nearby village for the exterior hand painting, which takes about a month. 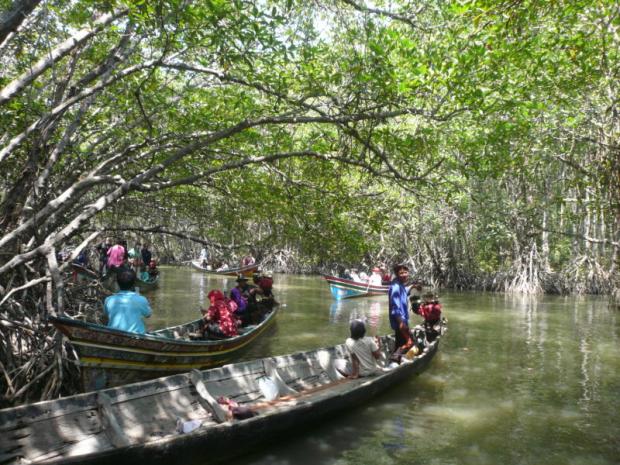 A mangrove ‘tunnel’ in Pattani Bay provides a cool respite for visitors in the midday heat.

During the field trip at the dockyard, some Andaman fishermen were heard inquiring about the fee for studying the process of kohlae building, assembly and painting.

"If Andaman fishermen send their people to train here, we will teach them free of charge, although that doesn't include board," Mr Muhamasukree said.

The PSSFA chair said so far, no fisher folk from other regions have visited the Ban Patabudee dockyard. Apart from the Andaman fishermen, no one has applied to attend the kohlae course which lasts more than two months.

However, a short course in boat repair and maintenance has been provided for young people from other communities in the province free of charge.

"We do not charge them because the Pattani local fishery school operates with a rule that veteran fisher folk give their time to teach novices," Mr Muhamasukree said.